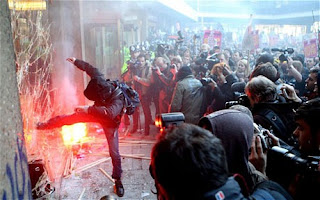 Charles Moore wrote a good piece in the Telegraph on the recent Millbank riot in London, in which a number of ‘students’ indulged in a spot of destruction for the sake of destruction, thuggishness for the sake of thuggishness (Liberty will suffer if the police can’t keep the peace). I’ll come on to this in a moment but there is something else I want to consider first, a quotation offered by one of the contributors to Moore’s blog:

A democracy is always temporary in nature; it simply cannot exist as a permanent form of government. A democracy will continue to exist up until the time that voters discover that they can vote themselves generous gifts from the public treasury. From that moment on, the majority always votes for the candidates who promise the most benefits from the public treasury, with the result that every democracy will finally collapse due to loose fiscal policy, which is always followed by a dictatorship.

This was written by Alexander Fraser Tyler, a Scottish-born historian and lawyer who died in 1813. Tyler apparently was a specialist in Greek and Roman history. Here he is obviously not writing about the politics of his own time, when there was no democracy in the sense we understand it today. Not being aware of the context I’m guessing this is a comment on the politics of some of the Greek city states or, more likely, the late Roman Republic, which was to collapse under the weight of its own contradictions.

As a pertinent observation on our present politics it’s hardly accurate: no modern democracy, despite widespread economic problems, has shown any sign of giving way to dictatorship or even to more authoritarian forms of rule. But even so there are dangers here, dangers that Tyler has clearly recognised in the combination of populist politics and fiscal irresponsibility. The Labour government of Tony Blair and Gordon Brown did dreadful damage to the public finances of this country, indulging in spending that was little better in some cases than a grand form of political gerrymandering, appeasing their own electoral constituencies, appeasing those who live by doles or state employment.

Now we are suffering the consequences, with levels of public debt containing so many zeros after the principal number that it’s almost impossible for most people to comprehend. So many hard decisions have to be taken, decisions that the constituency conjured up by Labour don’t like, don’t understand, don’t want. They just want more of the same, more bread and more circuses. If they don’t get it, as we saw at Millbank, destruction rides in on a big black letter A.

The higher education system in this country is excellent; it continues to be among the best in the world. But it has to be paid for; universities have to be allowed to charge an appropriate level for tuition fees to guarantee the best, money which is not going to come from the public purse, not now, not ever. So top-up fees is the most realistic plan on offer.

Now cue the student proletariat (should it be lumpenproletariat, I wonder?), cue the riot at Millbank Tower, where Conservative Party headquarters happen to be. Not that these people got anywhere near the offices. No, for as Moore says, they just ran around terrifying the people who work in the building, most of whom have nothing at all do with the Party.

That same evening a spokesman for the National Union of Students appeared on the news, saying that their ‘peaceful protest’ had been hijacked by a minority, the usual excuse on offer (a thick-accented, thick A activist appeared later, saying that they would not have got the headlines if they had not). The only thing the silly dweeb omitted to mention is that the NUS advertised the march in advance as ‘Demolition.’ Who does he think is going to come to Demolition other than those with a desire to demolish, the same faces, I dare say, that appear at G-however-many-it-is-now jamborees or Make Poverty History carnivals. How representative are they? I honestly do not know though I agree with Moore, who says that it is almost never the genuinely poor and downtrodden, the jobseekers or single mothers, who start pillaging, just a middle-class mixture of idiots and fanatics enjoying themselves.

It would be easy to dismiss these people as a minority but they are still a genuine danger, especially when the police lose control. There is no guarantee of liberty, no guarantee that democracy and the rule of law will stand no matter what pressures are put upon them; they are as vulnerable as every other part of our civic culture. If you don’t believe me go ask the Romans.
Posted by Anastasia F-B at 11:46