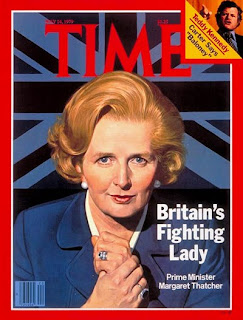 This is another of the essays I wrote for a multi-author site not long after I finished reading a biography of Edward Heath, prime minister of Britain in the early 1970s, a fairly disastrous time in our history. I think it worth preserving here, especially in the light of our present circumstances.

There is only one small problem – it’s not scheduled for publication until after her death, something I would not advance, or wish to see advanced, by a single degree. The longer this great and wonderful lady is with us the better.

Looking back over the history of Britain since 1945 I see Margaret Thatcher standing like a political colossus, a refreshing contrast to every other prime minister, and I do not exempt Winston Churchill, whose peacetime ministry was little better than a disappointing postscript to his wartime days.

Reading the reviews of a newly published biography of Charles de Gaulle oddly enough it was Thatcher he brought to mind, because I think she occupies an analogous position in British history to his in the history of France.

Think about it; think about the position of our country in 1979. We hadn’t been defeated in war, that’s true, but objectively speaking we may very well have been, judging by the political and economic condition of the nation. Inflation was out of control; trade union barons, like medieval condottieri, were in the habit of marching in to Downing Street to dictate terms, the whole social fabric of the nation was in danger of unravelling in the face of continual political mismanagement, appalling under Labour, not that much better under some Conservative administrations.

The rot goes back to 1945. The nation was bankrupt; there needed to be a major period of economic retrenchment and renewal. Instead our capital was frittered away on ruinous welfare programmes, things we simply could not afford. So, our major competitors, who did not make the same mistake, had a march on us. The Germans emerged stronger in defeat than we had in victory. We had won the war only to lose the peace, a cliché, I know, but one that sums up the ensuing period so well.

By the time Labour left office in 1951 the damage had been done. A new orthodoxy emerged that welfarism and the mixed economy was a ‘good thing’, an orthodoxy that was to go by the name of Butskellism, combining the names of Rab Butler, a Tory Chancellor, with Hugh Gaitskell, leader of the Labour Party prior to Harold Wilson. Perhaps if Churchill had been in the vigour of life, perhaps if he had taken a greater interest in domestic economic management rather than foreign affairs, things might have been different. Unfortunately they were not.

Then came the age of the two Harolds, MacMillan and Wilson, a time when Butskellism reached its high tide, a bogus age, a dishonest age when underlying problems were simply ignored, problems like the ever increasing rate of inflation and poor productivity, only disguised by a favourable international situation. The whole illusion was sustained by the hocus-pocus of Keynesian economics, the belief that the state can regulate the economy for the benefit of all, forever, and ever, and ever. Well, it can’t.

For all these reasons and more I believe her to be the greatest living Englishwoman, greater, by far, than all her male contemporaries. Her legacy will shine far into the future.
Posted by Anastasia F-B at 15:58