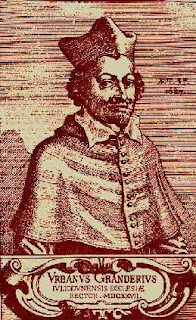 I first came across the story of the Loudun possessions in the course of my researches on seventeenth century English history. To be specific, it was in reading about the life of John Maitland, duke of Lauderdale, one of the figures in Charles II’s infamous Cabal ministry, who as a young man had visited the Ursuline convent at Loudun in western France, where a number of the nuns were said to have undergone demonic possession.

Lauderdale, a man of formidable and rational intellect, quickly concluded that the whole thing was a fraud. Fraud it may have been but it had particularly serious consequences for Father Urbain Grandier, the local priest, who was burned in the town in August 1634 after being convicted on a charge of witchcraft.

The Loudun possession is an altogether fascinating tale, involving sublimated sexual frustrations and grand politics. Grandier had a bit of a reputation, distributing his masculine favours among some of the nuns. Loudun was a hothouse of frustration, jealousy and potential hysteria, something I suspect true of most nunneries of the day, refuges often for genteel women who had little or nothing in the way of a vocation.

Grandier was unlucky enough to have attracted the obsessive attention of the Mother Superior, Sister Jeanne of the Angels, who accused him of using black magic to seduce her. Now the latent hysteria of the place came to the surface, with other nuns coming forward with similar accusations. While this is impossible to prove, I suspect that these charges were mostly levied by those who had not attracted Grandier sexually. He was duly arrested, interrogated and acquitted by an ecclesiastical tribunal, clearly not convinced of the value of the ‘evidence’ against him.

But Grandier was unlucky enough to have attracted the enmity of a far greater person than Sister Jeanne. It took a brave or a foolish man to attack Cardinal Richelieu, the leading figure in both church and state, and Grandier had been both brave and foolish, criticising the Grey Eminence in word and writing. The Loudun accusations were all that Richelieu needed to rid himself of a turbulent priest.

Grandier was rearrested and although the previous accusations were not renewed he found himself arraigned on an altogether more abstract and sweeping charge of witchcraft, one which involved consorting not with nuns but with demons. A document was produced ‘proving’ that he had entered into a diabolical pact. He was clearly a person of some importance to the satanic community, given the names of those who witnessed the pact;

We, the influential Lucifer, the young Satan, Beelzebub, Leviathan, Elimi, and Astaroth, together with others, have today accepted the covenant pact of Urbain Grandier, who is ours. And him do we promise the love of women, the flower of virgins, the respect of monarchs, honors, lusts and powers. He will go whoring three days long; the carousal will be dear to him. He offers us once in the year a seal of blood, under the feet he will trample the holy things of the church and he will ask us many questions; with this pact he will live twenty years happy on the earth of men, and will later join us to sin against God.

Bound in hell, in the council of demons. Lucifer Beelzebub Satan Astaroth Leviathan Elimi The seals placed the Devil, the master, and the demons, princes of the lord.
Baalberith, writer.

Thinking of this in present-day terms it would be like some minor spy being signed up by the Prime Minister or the President, along with leading members of the cabinet! But Grandier, despite the most extreme torture, never confessed to witchcraft.