A Tale of a Succubus 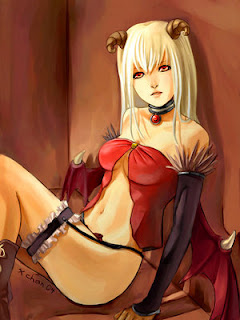 This is a tale of a succubus. Yes, it truly is, something I came across quite by accident in looking into sexual shenanigans at the German imperial court. The focus moves to another court, much further east, to that of Japan, where the emperors, it is alleged, have sex with a succubus during special Shinto rituals, a practice which impacted on the stock market, bringing about the fall in share prices in the 1990s!

This bizarre argument was endorsed by one Jack Hayford, pastor of a California megachurch, the sort of place that I imagine to be replete with religion and devoid of God. Apparently Hayford’s Church of the Foursquare Gospel has a membership estimated at anything between five and ten million, including Senator John Ensign. The pastor is sufficiently well-connected that he was chosen to give a benediction at the inauguration of President George W Bush in 2001.

But Hayford has been seen in other places, in other company. A video has been uncovered from the 1990s showing him introducing one Peter Wagner, who went on to inform the audience of the sexual practices of the Mikado. Seemingly during the course of the Daijosai Ceremony, a sort of imperial initiation to mark the beginning of a reign, he eats rice planted, harvested and chosen through witchcraft. Full of this stuff, he is then visited in the night by the Sun Goddess for a bit of a postprandial romp.

Ah, but one emperor’s Sun Goddess is another loony’s succubus;

You ask, "is this physical or not ?" -- it could be. Because there is a certain spiritual phenomenon, succubus -- it's called succubus. There is a documented physical relationship between human beings and demonic beings

The Emperor’s sexual union, he goes on to say, was an invitation for this imp to continue to demonize the land, with unfortunate and unforeseen consequences;

Since the night that the present emperor slept with the sun Goddess, the stock market in Japan has gone down - never come up since. This has been a disastrous year - first year the rice harvest failed, first year Japan has ever had to import rice. For Japan to import rice is not just an economic disaster -- they lose face. For the Japanese it's very serious. The auto industry is falling apart because of the Yen -- the Yen is becoming so strong against the Dollar they can't export anything or sell anything.

Yes, remember that you read this here; we now have succubus-based economics! Actually Pastor Jack goes in for more than this sort of things; his demons truly are legion. He also seems to have been associated with attempts to exorcise ‘homosexual demons’, including one from a sixteen year-old boy. His church was the headquarters for the Cleansing Stream Ministries, which specialises in teaching Christians to cast out their own demons, a sort of ‘do it yourself exorcism’, as the Associated Press reported. The demons in question are, like the Japanese succubus, all about sex, specifically sexual ‘sins’ like homosexuality.

Seemingly casting out of demons, sexy sex demons, is the way to an earthy Utopia. In 1997 Hayford co-edited a book with the unpromising title of Loving Your City Into the Kingdom: City Reaching Strategies for the 21st Century, which recommended the mass expulsion of demons by something called Prayer Walking. The said walkers are encouraged to walk the streets indulging in a spot of grid praying, thereby expelling multiple demonic presences. So far so loopy, but the walkers are also encouraged to take notes on ‘ideological enemies’, clearly all those subject to some demonic influence.

Well that’s one way to paradise, not mine, though, most definitely not mine. But I would say that, wouldn’t I? After all, I’m not just an ideological enemy; I’m a succubus. :-)