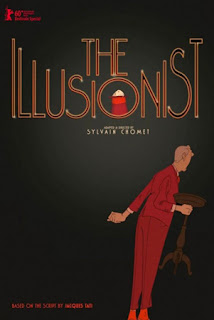 I saw The Illusionist this afternoon and I'm absolutely full of it, overwhelmed by its simple magic. I normally wait a day or so after seeing a movie before writing a review, to allow me to digest it properly, to allow me to digest its significance and its message. Now I simply want to write from the heart, I want to write impressionistically while it is fresh in my head.

Directed by Sylvian Chomet and based on a script by Jacques Tati, it's an animation, but what an animation. It's not the first I've seen, it's not the most sophisticated or polished, but it is so well-crafted with a simple and sincere message. There is none of the expensive artificial polish and plasticity of the Disney factory. This is handcraft, the work of artisans.

There is almost no dialogue, or such dialogue as there is, in English, French and Gaelic, are merely introjections. Instead its all about mood and meaning, gestures conveyed by expression alone. It tells of the relationship between Tatischeff, a vaudevillian and illusionist, and Alice, a young girl he meets in pub the Scottish Highlands, where she is working as a maid. This is a father daughter relationship, worked out on the basis of the most touching of whimsy, her naïveté and his desire to preserve the innocence of illusion, something he himself no longer believes in

The movie is about the passage of time, of changing tastes and changing fashions. Tatischeff is part of a dying profession, declining, stale and passé, as music hall is declining stale and passé. It's set in the late 1950s, which the animator seem to capture to perfection, including a wonderful image of old King's Cross Station. Tatischeff, the rabbit out a hat and card trick man, finding things difficult in his native France comes to England, where things are not much better. A new wave of pop star is rising, represented by Billy Boy and the Britoons, to whom he plays second on the bill; but when his turn comes the auditorium is virtually empty.

At a summer party the conjurer meets a drunken Scot who invites him to perform in his bar in a distant Highland community. He arrives there, a place so remote that it is just acquiring electricity, to discover that the age of innocence is not quite dead. People are enchanted by his performance. But time, as ever, is catching up. No sooner has he finished than a juke box is installed, a sign of tastes to come. He has one lasting success, that over Alice, firm in the belief that the magic is real, so enchanted that she follows Tatischeff to his next engagement in the city of Edinburgh


Now we meet the real star – the city itself. Most of the action is set in central Edinburgh. While it's not absolutely necessary it helps if one knows the city. I know it well and I've never seen it looking so beguiling, so beautiful, so innocent, yes, innocent, and utterly charming, from Arthur's Seat to Princes Street. The observation, the detail is so impressive, street names and locations, this is no imagination recreation; this is a real place, though from specific locations it’s possible to understand the impact of change over the past sixty years. 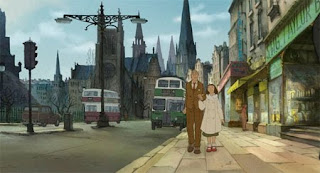 Things do not improve for Tatischeff, as he and his profession move in ever downward spirals. But for Alice he continues to work like Merlin. The dowdy Highland girl is transformed into an Edinburgh lady with shoes and clothes he buys her with his diminishing resources, things she believes appear ‘as if by magic’. In the end he is no longer able to keep up the pretence. He abandons both Alice and Edinburgh, thoroughly disillusioned with his life. “There is no magic”, he says in a note left for Alice, who has since fallen in love. But there is magic: the girl is his magic, his last and most poignant transformation. This movie, full of sweet melancholy, is also magic. 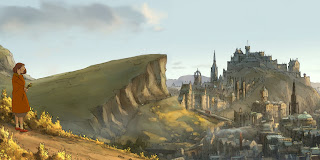