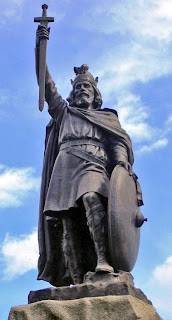 The October issue of Prospect has a review by Maurice Glasman of Michael Wood’s new book The Story of England. The publication ties in with a new six-part documentary on BBC 4, purporting to unravel English history in microcosm, looking at it through the prism of a single village, Kibworth in Leicestershire. Wood is good as a telly historian, always tackling his subject with simple clarity and school-boyish enthusiasm; so the new venture looks quite promising.

I’ve not read the book so I can offer no direct comment here. However, Glasman, in his own analysis, has raised some general issues with which I am in absolute agreement. He begins with a stark observation: “There is a political void where England should be.” It’s perfectly true: England no longer governs itself. The people of Scotland, Wales and Northern Ireland all have devolved parliaments or assemblies. But what about England the country that created Parliament in the first place? Westminster, the seat of an ancient assembly, represents the union, not the nation. As Glasman puts it, England, as a political nation, has no body and it cannot speak.

Wood writes in his book “For a small country on the far shore of the Eurasian landmass, its influence on the world of literature, language, politics, law and ideas of freedom has been out of all proportion to its size. Why this should have been so is an interesting question in itself.” It certainly is. An even more pressing question is why has England been diminished and marginalised? The Scottish question, the Welsh question and even the Northern Ireland question, at least to a degree, have been answered, but not the question of England, now the most pressing part of the last government’s catastrophically bad constitutional ‘settlement’ that settled nothing.

England has been betrayed. Wood’s book is about the ordinary people of England, the labouring poor, as they were once described, the people who have been subject to particular treachery by those who pretend to represent them in the modern world. Glasman takes the example of mass immigration, which affected England more than any other country of the union- “Yet there was no political body that could speak for England, that could express and embody the political life of the nation.” The dispossession of the English, it might be said, has been almost as thorough as the dispossession of the Anglo-Saxons in the wake of the Norman Conquest.

It’s almost as if some conspiracy has been at work to submerge England, to submerge the story of England. The disconnection between the English and the Labour Party, as Glasman reminds us, has been particularly profound. Where once was talk of native radicalism there is now a huge vacuum, a measure of the intellectual bankruptcy and shallow cosmopolitanism of the Labour movement in this country;

When Gordon Brown gave his most memorable speech of the election campaign on 3rd May at Methodist Central hall he did not speak of the Pilgrimage of Grace and the Levellers or of the London dock strike and the foundation of the health service, but of Martin Luther King, Nelson Mandela and Barack Obama, of civil rights and liberation. It was as if the struggles of people thousands of miles away were of more relevance than those of the country he wished to lead.

Glasman, a senior lecturer in political theory at London Metropolitan University, has political sympathies quite different from my own. He believes that Labour will need to rediscover a radical history rooted in a native tradition if it is ever again to “speak for the nation.” I would rather David Miliband, or whoever the next leader of the Party may be, waffled on interminably about Martin Luther King and Nelson Mandela, knowing very well that, beyond the hotbeds of Islington, there are precious few who care anything at all about these fashionable and wholly irrelevant international icons, avatars of a bankrupt mood.

Glasman concludes his essay by saying that the English question is silent in our politics and remains so; that it will take a very different book from Wood’s to begin to give it voice. How much longer can this be delayed, I wonder? The English people are remarkably tolerant, so tolerant that I suspect that most have no real sense over the extent to which their interests have been compromised or why they are so little heard. Their tolerance has been taken for granted, perhaps even as a sign of apathy or indifference, a sign that politicians can get away with anything, can hand out freedom to the fringes while denying it to the centre. For me the Union increasingly resembles a corpse tied to a vital body. If it has to be cast away for us to rediscover our identity, for the English question to be answered at last, then so be it.