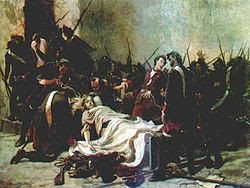 Those whom the gods wish to destroy they first make tsar of Russia. This observation was brought on by another report I read in The Times, this time about Ivan VI, Russia’s forgotten tsar. Ivan was not just forgotten by missing, having no known grave. Now his remains have seemingly been uncovered in the village of Kholmogory in the Archangelsk region of northern Russia.

Ivan’s fate makes that of the fictional man in the iron mask seem almost benign. He was a loser in a contest where to be in second place was lethal. Ivan succeeded the Empress Anna, his great-aunt, in October 1740 when he was only eight weeks old. But before he even knew what it was to be Autocrat of All the Russias he was overthrown in December 1741 in a coup organised by Elizabeth, daughter of Peter the Great. Elizabeth was proclaimed empress while the unfortunate child tsar was sent to Kholmogory on the White Sea, where he remained for the next twelve years, isolated from family and friends, seeing only his jailers.

It was ferociously cruel, given his age, but rival claimants to the imperial throne were a serious worry to a nation that in the late sixteenth and early seventeenth centuries had gone through a period of anarchy and upheaval, forever known as the Time of Troubles. Concerned by fresh troubles, Elizabeth had Ivan secretly moved to the Shlisselburg Fortress near Saint Petersburg after rumours began to spread about his presence in the north. There he was held simply as the “nameless one”, his identity unknown even to the prison governor.

Conditions for Ivan improved slightly on the accession of Peter III in 1762 only to deteriorate even further after he was overthrown in yet another palace coup. Catherine II, the new empress, ordered that the “nameless one” be held in even more stringent conditions, placed in manacles and scourged if necessary. His cell contained no natural light and the only book he was allowed to read was the Bible. Catherine also issued secret instructions that Ivan was to be killed instantly if any attempt was made to release him.

Ivan spent twenty years in solitary confinement before the end came, something of a mercy in the circumstances. Although a state secret of the first rank, his presence in Shlisselburg was finally discovered in the summer of 1764. In the course of a bungled attempt to free him Ivan, now aged twenty-three, was stabbed to death by his guards in accordance with the Empress’ orders.

Hitherto he was assumed to have been buried in an unmarked grave in the fortress. The new discovery was made as archaeologists were searching for the grave of his father in Kholmogory. A sarcophagus was found containing the skeleton of a man of Ivan’s age whose left shoulder blade had been pierced by a sword. Subsequent tests in Moscow at the Russian Forensic Medicine Centre have confirmed that the bones are those of the lost Tsar, according to Vladimir Stanulevich of the Emperor Foundation, a body set up to examine the remains.

It’s possible, I suppose, though until comparative tests are carried out some doubts must remain. The obvious question is why would such trouble have been taken to carry Ivan’s body all the way back to the White Sea? Catherine had no more rivals, so it is possible that she agreed to this final act of mercy, allowing Ivan to be buried alongside other members of his family.

But the Romanov family remains wary, issuing a statement that Ivan’s identity should be confirmed as a certainty before he is reinterred in the family vault in the Saint Peter and Saint Paul Cathedral in Petersburg. The Emperor Foundation is asking for government help to carry out DNA tests on Ivan’s siblings, who died in Danish exile. One can only hope that the nameless one is close to being named at last.
Posted by Anastasia F-B at 15:53