Losing the mandate of heaven 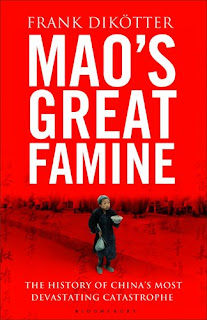 In my recent blog on Liberia I alluded in passing to Joseph Conrad, specifically having his novella Heart of Darkness in mind. Have you read it? If you have you will recall the final words of Kurtz in his moment of epiphany shortly before his death - The horror! The horror!

Let me take you to another heart of darkness; let me take you to China in the middle of the twentieth century, to the time of the so-called Great Leap Forward. I’ve been reading Mao’s Great Famine by Frank Dikötter, a new study of that grim period in the country’s history. It’s a sober, scholarly, thoroughly researched piece of work, written in clam and measured prose. But you should see my copy, see my marginalia, see the things I’ve written as I went along. I’ve not quite written The horror! The horror! though I came close, alighting on passages like this;

If the thatch on the roofs had not been consumed by fire, it was taken down and eaten in desperation. Villagers also ate the plaster from the walls. (p.169)

The worst form of desecration was to chop up the body and use it as fertiliser. This happened to Deng Daming, beaten to death because his child had stolen a few broad beans. Party Secretary Dan Naming ordered his body to be simmered down into fertiliser for a field of pumpkin. (p. 297)

Human flesh, like everything else, was traded on the black market. (p. 321)

But as desperate survivors all of them would have witnessed many of the horrors being inflicted on living human beings, from body parts being chopped off to people being buried alive. Surely, in the midst of state-sponsored violence, necrophagy was neither the most common nor the most widespread way of degrading a human being. (p. 323)

And so it goes on, the story of the most devastating manmade famine in all of history, one that is now estimated to have taken the lives of at least 45 million people. I do have one small criticism of this book – the title is rather misleading. Yes, most people caught up in this madness died of hunger, but a great many died of disease or neglect or were worked to death, including pregnant women; others were beaten to death with clubs. Some two million in desperation took their own lives. And of course, going on the Marxist principle that those who do not work do not eat, the sick and the elderly were simply given no food at all.

The madness had a face: the face was Mao Zedong, one of the most abhorrent criminals in human history. It was his ‘vision’ that in a few years China could overtake the capitalist West and the Soviet Union in its rate of industrial development. It could all be done, he believed, by a single act of collective will, voluntarism, his particular contribution to Marxist thought. Opposition was dismissed as ‘rightist’, the work of ‘bad elements.’ The demand was for higher and higher targets in every field of economic activity; and since the whole system was driven by fear, higher and higher targets meant bigger and bigger lies; bigger and bigger lies meant more and more requisitions until people were left with a hundred per cent of nothing. Farmers were driven from the fields to work on irrigation projects, worthless in the main, so no seeds were planted and crops grown. And since in the communist scheme of things steel production was an important sign of ‘getting it up’, Mao called for backyard furnaces into which people were compelled to throw all of their metal implements, even their cooking utensils, to receive brittle and worthless chunks of pig iron at the end. No matter, there was nothing to eat, so who needs a wok?

Existence was collectivised: people were driven into mass farms and then into vast communes. There was no defence in law, no right to private property; even nappies were commandeered. But on it went, Mao urged forward by a sycophantic court. Sparrows, he decreed, were vermin, eating grain; sparrows were to be exterminated. They were, in their tens of thousands, with the result that the pests which made up the largest part of their diet multiplied out of control, with an even greater impact on the diminishing food supply. In the end, in one of the craziest trade deals in history, China was obliged to import sparrows from the Soviet Union.

I do not envy modern China its prosperity; how it has earned it by forms of suffering that most of us simply can’t conceive; the suffering of parents who sold their children or relatives who had to dig up their dead in a country with a deep reverence for departed spirits simply because they had nothing else to eat.

It used to be said that when an imperial dynasty was coming to an end in the great cycles of Chinese history that it had lost the mandate of heaven. For a good part of the twentieth century, from the Revolution of 1911 until at least the death of Mao in 1976, China itself might be said to have lost the mandate of heaven. Frank Dikötter shows just how deeply the country descended into one cycle of hell. Not long after it was over Mao took into another – the Cultural Revolution. I can’t recommend this book highly enough.
Posted by Anastasia F-B at 16:38