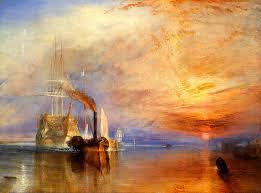 In an online history group I belong to there was a discussion of the merits of J. N. W. Turner’s painting Rain, Steam and Speed. It’s a fine painting by a fine artist, arguably the greatest, most original English painter of the nineteenth century. It’s impressionist before the impressionists, a great swirl of energy and movement, conveyed by whirlwinds of colour.

It’s not my favourite Turner painting, though; that honour belongs to The Fighting Termeraire, not just because of the brilliant execution, vivid colours and painterly technique but because of the story, the melancholy pathos of the subject, telling of the passing of one age and the advance of another, the eclipse of elegant romance and the rise of ugly functionalism.

The painting’s full title is The Fighting Temeraire tugged to her last Berth to be broken up, 1838, one of the permanent exhibits in London’s National Gallery. The subject is essentially a prosaic one: an obsolete battleship, one that had served as the second ship of the line with Nelson and the Royal Navy at Trafalgar, no longer of any practical use, being taken away by a steam tug to be scrapped, the timber salvaged for other purposes. Here we are, in the midst of the Industrial Revolution, an age of utility, an age without the patience for nostalgia and sentiment.

But Turner, who witnessed the final passage of the Temeraire while sailing on the Thames to Greenwich, has transformed the subject, given it a mythical quality in a scene of death and transfiguration. There is the great ship, the HMS Temeraire, known for her past glories as the Fighting Temeraire, in subdued and ethereal colours, her time long-past, already dead, grand and ghostly in the mist.

She contrasts sharply with the tug, squat and ugly but clearly defined, most definitely of the present age, a demon belching out fire and smoke, as Thackeray wrote. Adding to this most symbolic of all Turner’s paintings is a vivid setting sun, heightening the general sense of loss and nostalgia, the sense that there has passed away a glory from the earth. The age of sail has gone; the age of steam arises.

In his account of the painting John Ruskin was particularly expressive;

We have stern keepers to trust her glory to-the fire and the worm. Never more shall sunset lay golden robes on her, nor starlight tremble on the waves that part at her gliding. Perhaps, where the low gate opens to some cottage-garden, the tired traveller may ask, idly, why the moss grows so green on its rugged wood; and even the sailor's child may not answer, nor know, that the night-dew lies deep in the war-rents of the wood of the old Temeraire.

But thanks to Turner and his painting the vanished Temeraire is now as immortal and as mythical as Jason’s Argo. Paradoxically it is more real than the unnamed tug, representative itself of an age that has been submerged by the endlessly changing tides of time.