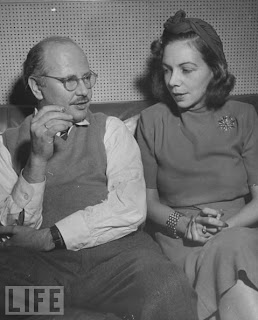 I hope to have a life as full as that of Virginia Cowles, though, like Alexander, I rather suspect that there are no more worlds to conquer, at least not the kind of worlds that she conquered. You’ve never heard of her, perhaps; well, until recently neither had I, not until I came across a review of Looking for Trouble, her memoir now republished by Faber and Faber, marking the hundredth anniversary of her birth. Here, behold the woman; this is the blurb from the original 1941 edition;

Miss Virginia Cowles has modestly entitled this account of four years as a roving journalist ''Looking for Trouble''. Never was a search more amply rewarded. She has found trouble in Spain – behind the barricades in Madrid, and among the polyglot armies of General Franco. She has found it in Russia, in Germany, in Czecho-Slovakia at the time of Munich, in Roumania during the Polish war, in Finland throughout the Finnish war, In Italy during the ''lull'', in Paris a few hours before the Germans moved in, in London during the ''blitz''.

Yes, she was a war correspondent, or, rather, she became a war correspondent after Hearst newspapers sent her to Spain in March, 1937. She was then twenty-seven years old. Bliss was it in that dawn to be alive, but to be young was very heaven! Cowles arrived in Madrid just after the Battle of Guadalajara, staying in the Hotel Florida, there with the likes of Ernest Hemingway and Martha Gellhorn, his then wife. 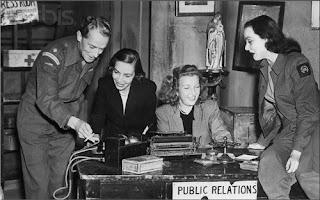 Yes, I know, it’s in the middle of a war in a city under siege but the whole thing just seems so impossibly exciting and – I really do have to say this- impossibly romantic! Cowles filed her reports from the Telephone Building in Gran Via, afterwards going off to the fashionable Chicote’s to drink with colleagues and associates.

But she wasn’t like the others, who all too often confused news with propaganda, or like that ghastly communist Claude Cockburn, presented propaganda as news. Though sympathetic to the Republican cause she was aware of the atrocities committed in the name of ‘anti-fascism’. And unlike Martha Gellhorn, dismissive of “all that objectivity shit”, as she put it, Cowles set off in pursuit of ‘all that objectivity shit’, spending several weeks covering the war from the Nationalist side.

Where the news was she was. From Spain she travelled backwards and forwards across Europe, interviewing all sorts of people, generals, statesmen, politicians and journalists. Sensitive to the general atmosphere, her reports warned time and again that war was coming, this despite an ‘assurance’ from the Hitler-loving Unity Mitford, whom she met at the 1938 Nuremberg Party Rally, that there would be no war because the Fuhrer did not want to see his new buildings bombed!

By the time the war came Cowles was a roving reporter for the Sunday Times, going from capital to capital watching “the lights in the death chamber go out one by one”, as she puts it. She was in Berlin the day German soldiers crossed into Poland, in Helsinki when Russian soldiers crossed into Finland. Later she arrived in Paris at a time when the German advanced guard was only seventeen miles from the city. This was war reporting in the raw, an age now gone, when journalists could come and go as they liked, rather than being shepherded, spoon-fed and corralled. From the Ritz in Paris to the Adlon in Berlin, Cowles was there.

It’s quite astonishing the number of people she met, interviewed and socialised with on a face-to face basis. When she was in London she went to see Churchill at Chartwell. In Nuremberg she was part of a select group that had tea with Hitler, Himmler, Goring Goebbels and Heydrich. She was taken flying in a two-seater plane over Tripoli by Air Marshal Italo Balbo in person. In Rome she was given an interview with Mussolini.

In England she dined with Duff Cooper after he had resigned from the cabinet following the Munich Agreement. He told her in beautifully frank terms that he might not have resigned if Chamberlain had been more honest, if he had returned from Munich proclaiming not peace with honour but “peace with terrible, unmitigated, unparalleled dishonour.”

Cowles was particularly fond of England, a calm oasis to which she returned time and again from Continental hotspots. In Looking for Trouble, published in June 1941, long before Pearl Harbor, she celebrates the British wartime spirit, finishing with a call to America to “…fight side by side with Great Britain until we reach a victory so complete that freedom will ring through the ages to come with a strength no man dare challenge.”

After the war she married Aidan Crawley, a fellow journalist who became a Member of Parliament. She went on to write biographies of people as varied as Winston Churchill, Edward VII and Kaiser Wilhelm II, as well as books on the Romanovs and the Rothschilds. Sadly Virginia Cowles was killed in September 1983 in a road accident in Biarritz. Sad, yes, but no life could have been any fuller, any more exciting.
Posted by Anastasia F-B at 11:44