Islam: an open letter to a friend 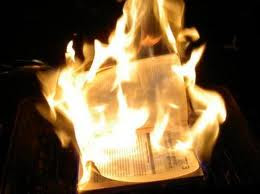 You asked me recently if I would disagree with you in saying that Islam was a contemptible religion. The short answer is yes, I do. I’ll explain my reasoning in a bit but I assume that your question was brought on by the comment I left on your blog about the Reverend Terry Jones and his proposed immolation of the Koran? Let me remind you of what I wrote;

I cannot see this as anything other than a stupid provocation by a stupid man, one that would have put American lives at risk. He is free to practice his religion; he is free to condemn Islam, if he so wishes; he is free to burn a sacred book in his benighted stupidity; he is even free to ignore the consequences of his pointless gesture, since abandoned. I personally want no part of this man's Kulturkampf

Straight away I have to say that I distrust the self-righteously intolerant; I distrust all those who know, within a shade of a certainty, that they are right and everyone else is wrong; I distrust people like Professor Richard Dawkins, the Ayatollah Khamenei and I distrust the Revered Terry Jones. No, more than that: I despise this mediocre man and his cheap stunt, given undue significance by the media at a sombre moment in the American calendar, one that is now bound to inspire imitations by people even more stupid and deluded than he is.

Then there is the issue of burning books, any book, which for me conjures up the ugliest historical associations, of ignorance and murderous intolerance. The Nazis burned books, the Inquisition burned books: these are the precedents here. You and most other educated people are doubtless familiar with the words of Heinrich Heine – “Where they burn books, they will also ultimately burn people”, words that happen to be inscribed on Yad Vashem, the memorial to all those who died in the Holocaust. I wonder, though, if people know where the words are from. Do you know? Well, they are from his play Almansor; the burners are the Inquisition and the book being burned is the Koran.

I wrote a brief piece a couple of years ago to which I gave the headline The Paradox of Islam. Here is part of what I said;

There is so much to admire in Islamic culture and history; in their architecture, their philosophy and in their art. When Europe was only just emerging from what was once widely known as ‘the Dark Ages’, Islam was moving steadily towards the fullest expression of a unique civilization. I’ve seen the Mezquita, the former mosque in Cordoba in southern Spain, built when the old Moorish kingdom of al-Andalusia was at its height, and it truly is breathtaking.

Cordoba and Baghdad were shrouded in light when London and Paris were little more than settlements of wattle and daub. It’s thanks to Islam, to Islamic scholars, that much of classical literature made its way into the modern world. It wasn’t Islam that invented murderous intolerance; that dubious honour belongs to Christianity.

You know my politics; I do not say these things because I’m a liberal or a cultural relativist. I’m right-wing and conservative, and from my perspective there is indeed much to admire in Islamic culture, with its emphasis on family, community and tradition, things that are dying away in the west.

My blog on The Paradox of Islam continues as follows;

It’s as well to remember, though, that militant Islam is not an aberration; the religion has always carried the sword, in the one hand, and in pen, in the other. It’s really a matter of degree. Arab civilization, in particular, has been in relative decline for centuries. The period when it was at the forefront of human progress is long gone. The advance of western imperialism in the nineteenth century, and neo-imperialism in the twentieth, was the occasion for what might be referred to as ‘great reappraisal’; that things had got so bad because Islam was not Islam enough. The emergence of the conservative Wahhabi movement and Islamic Jihad are but two symptoms of this phenomenon.

Yes, there are monstrous dimensions to contemporary Islam, just as there are monstrous dimensions to contemporary Christianity. You know very well how outraged I feel over the treatment of Sakineh Mohammadi Ashtiani, sentenced to death by stoning for alleged adultery. I think the present Iranian regime is one of the worst on the planet, perfectly vile, perverse and evil in its politics, its sense of morality and in its interpretation of religious law.

More widely I share a common sense of outrage against the perpetrators of 9/11 in New York and 7/7 in London. I remember the latter vividly. I was away at school, my last term, and I spent several desperate hours trying to make contact with family and friends in London, in tears for a good bit of the day.

Do I condemn Islam; do I condemn a whole faith community for this? No, I do not, no more than I condemn Christians for Oklahoma, Omagh or for the outrages perpetrated in Baghdad in the wake of the war brought on by the Blair-Bush Axis. There are some 2 billion Muslims in the world. To condemn them all because of their religion, to describe their religion as ‘contemptible’, to burn their sacred books is for me both dangerous and senseless. It’s as well always to maintain a sense of proportion, to condemn what needs to be condemned and to praise what needs to be praised.

Besides, I have many Muslim friends, people I know from university, as cultured and as tolerant as any I have ever met. It was through blogging that I met the poet Rehan Qayoom, who offers comment here from time to time and on my Facebook page, a gentle, civilized, educated and a pious man in the best Islamic tradition.

Since Terry Jones emerged, blinking into the light, more and more details of this unpleasant individual and his own perverse interpretation of religion have trailed along with him. I’m sure he will sink back into the dark from whence he came, a minor provocateur, not a prophet, one of the nameless legions, one of the rough beasts, its hour come round at last, who slouched towards Television to be born.
Posted by Anastasia F-B at 17:17