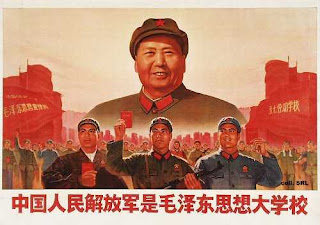 July of next year marks the ninetieth anniversary of the foundation of the Chinese Communist Party. Having last year celebrated the sixtieth anniversary of the foundation of the People’s Republic, yet another jamboree is being planned. I understand that John Woo, the Hong Kong film director, whose Hollywood credits include Broken Arrow and Mission Impossible II, has agreed to make a new blockbuster to mark the occasion. The title is already in place: it’s to be called – wait for it- The Great Exploit of Building the Party. Yes, a guaranteed crowd pleaser.

True to the national character, the Communist Party continues to behave in the usual inscrutable fashion. Even so here seems to be a new willingness to face some of the ‘errors’ of the past, though I not sure how this could be done without destroying the remaining credibility that still attaches to Mao, whose moon-like face still stares impassively over Tiananmen Square.

Apparently at a recent top-level forum on party history Vice President Xi Jinping, while stressing that officials must “propagate and propagandise” the valuable experience it has accumulated, also made reference to the “horrifying price” that had been paid for its mistakes. It’s unlikely that these ‘mistakes’ will be outlined in any detailed way.

I don’t suppose it really matters all that much. China is now effectively a capitalist economy ruled by a self-perpetuating oligarchy. The ideological struggles are over and Maoism is like some grand church, visited on high days and holidays then ignored for the rest of the year.

The worrying thing for the oligarchs, though, is that the workers in the ‘workers state’ are starting to get restive, demanding trade union rights and kicking against corrupt officialdom and unscrupulous capitalist entrepreneurs. Even Mao receives the occasional brick-bat, thrown at his mooning face! Never mind; I expect they will all cheer up when The Great Exploit of Building the Party finally makes it to their local multiplex.
Posted by Anastasia F-B at 15:19