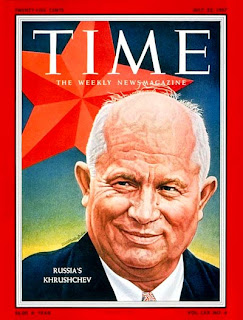 I know it’s difficult to believe but there was a time when the old Soviet Union looked as if was on the edge of a great economic and technological breakthrough, that it might conceivably have overtaken the west in terms of development. It was, if I can term it so, the Age of the Sputnik, a brief illusory interlude before the Soviet Union fell into that final stage of irrelevance and decrepitude, Upper Volta with Rockets.

This window came with the launch of the first Sputnik in 1957 and ended with the Cuban Missile Crisis in 1962. It was a period of reasonably steady growth that caused then Premier Khrushchev to predict that the Soviet economy would soon overtake the west. The problem is that things did not stay still, that there are always two sides to any equation. Capitalism, true to its nature, continued to adapt, advancing still further. The Soviet economy, despite the heavy investment in scientific education and space technology, turned out to be little better than a Potemkin village, impressive on the outside but quite hollow within.

There is something else about those years, the Khrushchev years, something that goes to the heart of the First Secretary’s psychology as well as his personal beliefs. As I mentioned in a previous blog, after Molotov, the former foreign minister, was purged from the Communist Party in the wake of the de-Stalinisation programme, his wife, Polina, made a personal appeal to Khrushchev for his readmission. In response he took her to the archives to show her the many execution lists her husband had signed. But those same archives contained lists signed by Khrushchev himself, if less guilty only by trivial degrees.

We all know about the Terror, the mass executions, the destruction of millions of people. We all know that Stalin was denounced by Khrushchev for his many crimes. But what is perhaps less well-known is that he did more than denounce has former boss; he made an absurd attempt to prove that the sacrifice of so many innocent people had not been in vain, to prove that the promise of communism was something more than a murderous fraud.

In 1961 the Party Congress, under Khrushchev’s guidance, adopted a programme anticipating the end of all scarcity, anticipating the attainment of full communism by 1980, all this as people still had to queue for the most basic goods. The absurdity of the whole thing was caught in a popular joke of the day. The phone rings in the apartment of Yuri Gagarin, a well-known cosmonaut. His daughter answers, saying “I’m sorry, mummy and daddy are out. Daddy’s orbiting the earth and he’ll be back at 19.00 hours. But mummy’s gone shopping for groceries, so who knows when we’ll see her again.”

I came across this in an interesting article I read by Francis Spufford, whose book Red Plenty was published last month. He makes the point that Khrushchev’s laughable hostage to fortune - soon abandoned along with him - was given because his conscience demanded a happy ending for all the horror, all the pointless horror that went before. He was looking, in other words, for some kind of absolution from history.

Dialectical materialism: it was set to do exactly what it says on the tin. Except it didn’t; it couldn’t: it was just an empty husk, another Potemkin village, this time of the intellect. Spufford makes the point that along with our sense of Soviet history as a tragedy we should also embrace the comic dimension, the comedy of ideas and of things, things refusing to obey the roles allotted to them by bossy human intentions.

The problem of the Sputnik Age was that while the Soviets could produce experts by the score, and could even pay them relatively well for their expertise, the economy was such that the ‘contradictions’ (a favoured Marxist terms) made sure that paradise was eternally postponed, the kind of contradiction highlighted in the Gagarin joke. You see, in the west, as Spufford says, if you have the money you can have the thing. In the east having the money was only the start of a campaign to acquire the thing! This is the heart, the comically absurd heart, of planned economies, of tyrannies where ideas and information only ever flow in one direction.

Here lies Upper Volta with Rockets, the historical epitaph of the Soviet Union. At some future point I rather suspect here lies Saudi Arabia with Rockets will be the epitaph of Putin’s Russia.
Posted by Anastasia F-B at 16:42