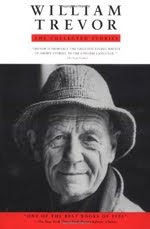 Over the years I’ve derived so much enjoyment from short stories, in some ways my favourite literary genre alongside the critical essay. I really began when I was little with myths and folktales, a tradition for which I still retain considerable affection. By the age of ten or so I was reading Edgar Allan Poe’s Tales of Mystery and Imagination. From there, in successive stages, I discovered such wonderful story tellers as William Somerset Maugham (his Far Eastern stories are a particular favourite), Isaac Bashevis Singer (a magician in words), Nikolai Gogol (my favourite Russian writer in the medium), Graham Greene (who writes extensively in this genre though he is better known as a novelist), Anton Chekhov, Alphonse Daudet, James Joyce, Ambrose Bierce, Franz Kafka, H. H. Munro (better known as ‘Saki’), William Porter (better known as ‘O Henry’) along with so many others, including Balzac and Dickens, not generally associated with this literary form.

Now I’ve discovered William Trevor, an Irish writer, having not long finished The Collected Stories, published by Penguin Books. I suppose it’s not quite true to say that his work is a totally new discovery because I came across him previously, one story, I think, in an anthology of Irish writing, but not enough to form a proper impression. Now I have and there is no doubt in my mind that he will last as one of the great masters of the medium. He writes with such amazing fluency, beautiful limpid prose with a simple realism that reminds me so much of Chekhov. His work is rich in gentle irony with slight overtones of sadness, of empty lives and frustrated hopes.

His stories are mostly set in England or Ireland, often among the most marginal people, those on the edges of society, people often buffeted by an uncertain fate, unsure of who they are and where they are going. Yes, there are elements of pathos and melancholy, offset quite often by an undercurrent of humour. This is the thing about life, something the best writers have always understood: comedy is never that far removed from tragedy.

Some of his female characters caused me to laugh out loud at points, including the impossible Mrs da Tanka in A Meeting in Middle Age, the first in the collection, who teams up with the unfortunate Mr Mileson, a sort of agency detective, in a hotel together to spend the night, thereby providing grounds for a divorce in the days when such matters were complicated. Yes, they team up together in a way that a lion teams up with a gazelle!

In general Trevor shapes characters, in complexity or simplicity, who are totally believable. He is there as a narrator, as a third presence, only in the lightest possible way. He does not ‘create’ his people; he allows them to create themselves, to build themselves up through their own words and actions. There is little in the way of a narrator’s prologue; this is life unfolding as we go along, as fate works away.

The language, the use of words, is quite delicious: precise, beautiful, simple and elegant. There is nothing in the least artificial about Trevor’s prose style, which has directness and a sense of realism that I so admire, largely free of a tangled undergrowth of adjectives, something that only the very best writers can command. For the most part these are small and intimate dramas, not covering a huge range of possible situations, and yet paradoxically immense. In over eighty stories at no point did I feel that I was going over the same ground: each situation seemed unique and fresh.

Did I have any favourites? Well, yes, I suppose I did, though I find it immensely difficult to make a distinction in that having favourites seems to suggest that those not selected were somehow less worthy. At over 1200 pages long this is a compendium of favourites. I should make special mention, though, of Beyond the Pale, where a woman is confronted with the tragedy of Irish history, confronted by a legacy of love, loss and terrible bitterness. The tale she tells destroys a lying idyll. And then there is Matilda’s England, a story in three parts, an enchanting and poignant narrative of time and tide and fortune, of happy highways where people went and can never come again.

I sit here in here now in her drawing-room, and may perhaps become as old as she was. Sometimes I walk up to the meadows where the path to school was, but the meadow isn’t there any more. There are rows of coloured caravans, and motor-cars and shacks. In the garden I can hear the voices of people drifting down to me, and the sound of music from their wireless sets. Nothing is like it was.

This is immediately followed by Torridge, quite different in tone, with a bitingly humorous ending, one that completely dismantles the comforting illusions of a nauseatingly self-satisfied group of old school chums.

These are just a few examples. I could go on and on but there is really not much point. I can only pay proper tribute to Trevor by retelling his tales one by one. You can do justice, if you are minded to, in reading them for yourselves.
Posted by Anastasia F-B at 15:13