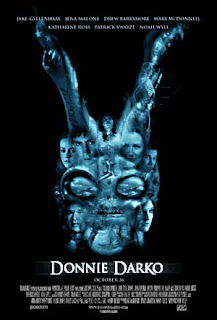 Recently I mentioned Donnie Darko in passing, a movie I saw when I was fifteen, one which made a huge impact at the time, one which has left a lasting impression. I think we all have movies that speak to us intimately at some point or other in our lives, either because they catch a passing mood or, more lastingly, seem to reflect something deep in our character, acting like a mirror. There are not necessarily great movies just meaningful ones.

My all-time favourites include Picnic at Hanging Rock, the original version of The Wicker Man, Fucking Amal, Loving Annabelle and The Craft, all of which carry for me a personal message. And then there is Donnie Darko, something quite different, a case sui generis. This is my movie; it speaks to me and nobody else, though I note that it ranks ninth in Film Four’s list of 50 Movies to See Before You Die!

What I’m about to write is not a review. Is there any point, after all, in writing a review of a movie that’s now nine years old? No, it’s not a review; it’s an appreciation. I’ve been thinking about it on and off for most of the day, working out the kind of things that I’d like to say. It’s not easy. The simple fact is that this is a complex movie, one that is possible to read on any number of levels: it’s horror, as creepy as they come; it’s a thriller, it’s science fiction, it’s fantasy, it’s a comedy, a black one and a white one; it’s a coming of age story; it’s about teenage angst; it’s more, much more.

In some ways it’s a bit of a cliché, you know the sort of thing, the dark underbelly of the American Dream, the rot below suburbia. In other ways it’s derivative, with a directorial style reminiscent of that of David Lynch. But all in all it’s something truly special, a story that could very well be described as J. D. Salinger by way of Philip K. Dick! The whole thing for me is wild delirium, a remarkable surrealist dream, something perhaps not even Dali could have conceived.

It was directed and written by Richard Kelly, a debut all the more remarkable in that he was only twenty-seven years old at the time. He managed to bring out superb performances from a range of veteran actors, including Patrick Swayze, Drew Barrymore, Mary McDonnell, Katherine Ross and Noah Wyle. But the star and the star is Donnie himself, a brilliant performance by Jake Gyllenhaal, moody, introspective, bitingly intelligent. Donnie is me, I am Donnie; or rather I was when I was fifteen.

Donnie is troubled; Donnie is haunted, my how he is haunted, haunted by Frank, a six-foot rabbit from hell! It’s early October 1988. Halloween is coming. Donnie, who is in analysis, is much given to sleep walking, waking up in the most unusual places, including golf courses. One night he is awakened by a voice calling his name. It’s then he meets Frank, who tells him that the world is going to end in 28 days, 6 hours, 42 minutes and 12 seconds, a scary message, perhaps, but one that prevents Donnie’s world ending immediately; for at that very moment a 747 engine drops from the sky into his bedroom. Nobody knows where it came from. It’s the beginning of Donnie’s nightmare; it’s the beginning of a story about premonitions, different dimensions and fractures in space-time. The time is out of joint. O cursed spite that ever he was born to set it right! 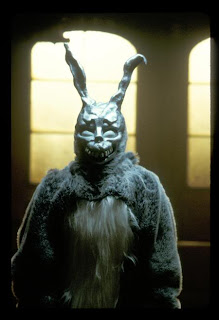 Donnie’s waking nightmares, his ‘hallucinations’ are bad; the visions in which Frank urges him on to successive crimes, including vandalising his school and setting fire to a house are bad, but in a way not as bad as his daymares (sorry; limp neologism!). He attends a private school headed by a stupidly unimaginative principle. The same school is heavily influenced by one Jim Cunningham, brilliantly played by Swayze, a motivational speaker and fundamentalist guru, who divides life into a simple fear-love axis, all good one side, all bad the other. He’s the spiritual equivalent of a snake-oil salesman, something Donnie recognises immediately, and a self-serving hypocrite. He is also much worse, as Donnie’s arson brings to light.

There are decent members of staff in the school, including the English Literature teacher Karen Pomeroy, played by Drew Barrymore, eventually sacked for ‘modern’ ideas, and the Science teacher Dr. Kenneth Monnitoff, played by Noah Wylie, who helps Donnie with his challenging questions about worm holes and time travel, stopping short when he, too, fears he might be sacked. Then there is Kitty Farmer, played by Beth Grant, a disciple of the Cunningham method of motivation, so stupid she thinks Graham Greene, the English writer, is a pornographer who has something to do with Bonanza, a television western!

It’s the encounter between Donnie and Mrs Farmer that provides one of the movie’s funniest moments. She is teaching the hate love method of moral choice, with examples that have to be placed on one side of a continuum between the two or the other. Donnie resists, arguing the point, that there are other things to be taken into account, like the whole spectrum of human emotion. Things, he insists, are not that simple, that it’s impossible to lump everything into these two categories and then deny everything else. He’s is told that if he does not complete the assignment he will get a zero for the day. Donnie looks thoughtful, turns to the woman and opens his mouth. Cut to the principle’s office, with Donnie, his parents and Mrs Farmer in attendance. The principle asks what exactly he said to her. She immediately buts in, “I’ll tell you what he said. He asked me to forcibly insert the lifeline exercise card into my anus.”

Brilliant, imaginative, deeply intolerant of fools, there is no place in this small-minded universe for a teenager like Donnie. In the end he shoots Frank, not the dream Frank but the real Frank, dressed in a bunny suit, who accidently runs over his girlfriend Gretchen, played by Jena Malone. At the same time his mother and younger sister are flying back from a dance competition in California. Their plane encounters a vortex which pulls off an engine, drawing it back in time to 28 days earlier, the very point when Donnie is first summoned by Frank. This time he chooses to stay in bed. His world ends as the engine comes crashing through the roof.

The ending is pure Blue Velvet. Donnie’s family are in the street in a state of shock. People look on in sympathy. A girl rides by on her bike. It’s Gretchen. She asks a boy what happened, saying she never knew Donnie. She gives a slow wave to Donnie’s mother, who returns the gesture. Just prior to this final scene Mad World is sung out mournfully in the background, the perfect tune for an astonishing movie.