To be good was to be dead 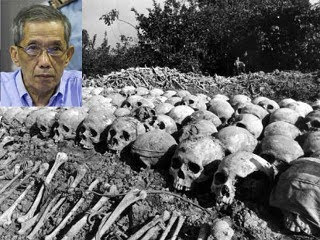 The traces are everywhere; the debris of death is everywhere. There are obvious places like Choeung Eck not far from Phnom Penn, where a memorial has been constructed, an ossuary containing thousands of skulls, many bashed in, evidence of how they met their end.

Nearby is a tree, now known as the Chankiri or the Killing Tree. When Brother Number One ruled Cambodia infants and babies, brought with their parents from Toul Sleng, the capital’s notorious detention centre, were battered to death against its trunk, swung by the feet. It was the habit for the murderers to laugh as they beat out brains because not to laugh was taken as an indication of sympathy for these tiny “enemies of the people”, and to show sympathy was to become a target.

Cambodia under the Khmer Rouge became a vast extermination camp, a land of perpetrators and a land of victims, with the slimmest of boundaries between the one and the other. The logic behind the killing process is almost impossible to comprehend for any normal human being. Any evidence of education was to put one in danger; even wearing spectacles was to risk being condemned as an ‘intellectual.’ The paradox is that the very creatures who inflicted this hell on earth, this Maoist paradise, were themselves intellectuals, far better educated than most of their victims.

One of these men, Kaing Guek Eav, better known as Comrade Duch, former head of Toul Sleng, has now been sentenced to nineteen years imprisonment for overseeing the torture and death an estimated 14,000 men, women and children. I visited this grim place, now the Toul Sleng Genocide Museum, when I was in Cambodia. With my entry ticket I was given an explanatory leaflet, detailing the ten rules that all inmates were meant to observe, far too bizarre even to use a word like Kafkaesque; rules like “While getting lashes or electrification you must not cry at all.”

Although the sentence is impossibly lenient, Duch believed that it should have been more lenient still. He believes that he should have been allowed to go free, though he admits to all of his crimes without equivocation. There is some deeper process at work here, a process of self-distancing, something I’ll touch on a little bit later.

Duch is the first person to be tried and sentenced for the genocidal crimes of the Khmer Rouge. Although many of the survivors have been angered by the sentence, one at least has to be thankful that there was any process at all, given the reluctance of the Cambodian authorities, many of them former Khmer Rouge cadres, including Hun Sen, the prime minister. But other trials are to follow, more important trials, including that of Noun Chea, Brother Number Two.

Chea was formerly the chief political ideologue of the Khmer Rouge. Something of his outlook and attitude has been caught in Enemies of the People, a remarkable low-budget documentary made by Thet Sambat, a journalist whose parents and brother were killed in the genocide. Hiding his background, and letting Chea and his underlings speak for themselves, his resulting footage comes as close as one is ever likely to get to the thinking of the Khmer Rouge.

Chea is seen talking to Khoun and Soun, two of his former underlings, men who specialised in slitting open stomachs so they could remove and eat the victims’ gall bladders, assuring them that “You did not have any intention, therefore you did not commit any sin.”

Here we have the same distancing shown by Duch, who admits to crimes while hoping to escape from personal responsibility. Chea goes on to describe ‘Democratic Kampuchea’ as a “clean regime”. He continues to refer to the dead as “enemies of the people”, whose removal was justified by the revolution. When Sambat finally reveals the truth about himself and the fate of his family Chea seems to slip from monstrous abstraction to genuine human sympathy, saying that he too lost many relatives to the regime. It defies words; it defies understanding.

All that is necessary for the triumph of evil is for good men to do nothing, Edmund Burke is alleged to have said. There were no good men in Pol Pot’s Cambodia; for to be a good man was to be a dead man.