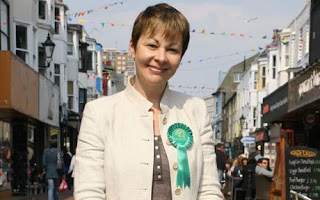 Caroline Lucas is the leader of the British Green Party. She is also their only member of parliament, winning the constituency of Brighton Pavilion during the general election earlier this year. Perhaps you know her; perhaps she is even your MP? But how much, I wonder, do you know about her? It’s not all cosy environmentalism and global warming tosh, believe me; there is so much more to this woman’s portfolio. So, let’s have a look.

To begin with I have to say that I am far from being an admirer of Julie Burchill, a columnist and sort of left-feminist answer to Ann Coulter, but when it comes to the insufferable Lucas she and I are in absolute agreement;

Lucas is another ‘Have’ telling the ‘Have Nots’ how to live their lives. Always suspect a political party that has NO leaders from the lower orders – they are guaranteed to be a bunch of hypocrites, scolds and bed-wetters.

Oh, dear Julie, the Green Fuhrerin is so much more than that, as you will discover if you read Julie Bindel’s comment in the Overrated section of the latest issue of Prospect. She represents the most degenerate stage in the intellectual development of Western feminism – that of cultural relativism. What I mean by this is that she is the kind of person who would be outraged by certain practices in Brighton while remaining blind to them in, say, Baghdad.

You see, in the great sisterhood, all women are equal but some are more equal than others; and the least equal of all would appear to be women who live in Islamic countries, particularly in those places dominated by a dark interpretation of Sharia Law. For Lucas, as Bindel points out, has shared a platform with those who believe that adulterous females should be stoned to death.

Who is he, you might wonder? Well, he’s a good friend of Red Ken Livingstone, the former mayor of London. Like Ken he is a truly enlightened individual who just happens to believe in female genital mutilation, wife-beating, and the execution of homosexuals in Islamic states. Lucas’ constituents might like to pay particular attention to the latter point as I believe that Brighton Pavilion is home to a higher than average number of gay people. Don’t worry; none of this is for you: it’s for ‘the others’, the less than humans, people who don’t breakfast on muesli and dine on tofu.

But the poor Sheikh is a much misunderstood man, Lucas says, the victim of a smear campaign. The stories about women and gays are all wicked press lies. All the evidence, all the independent evidence, to the contrary is just a fabrication. See what you want to see, hear what you want to hear, other symptoms of the terminal cultural relativism from which this woman suffers. She went for the pink vote during her election campaign, not mentioning in her literature that she sits alongside people who wish to see them dead.

Green politics are now her politics, and her politics are all so much guff and fluff. Remember that, you good people of Brighton, when you next tuck into a decent nut cutlet or a tasty tofu surprise.
Posted by Anastasia F-B at 16:25