Would you like to be shot? Come to Venezuela 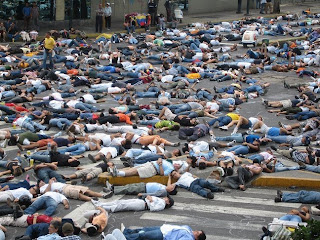 Here I am, once again, reporting from the Bolivarian Republic of Hugo. If you are thinking of coming to Caracas you might consider packing some body armour, for your chances of being shot here are higher than anywhere else in the world, outside of war zones, at least outside of some war zones. Even visiting sportspeople are at risk, as The Economist reported recently. What safer place to be than a playing field in front of thousands of people? This is something you might care to ask Cheuk Woon Yee Sinne, a basketball player from Hong Kong, who was shot in the leg while taking part in the Women’s Basketball World Cup.

It was an 'isolated incident', said the Chavistas, while immediately moving the tournament to a venue outside the capital. And then there is the statistics, something clearly has to be done about them too, just to show how rosy things are in Venezuela, a country replete with ‘isolated incidents’.

In the old Soviet Union the statistics about child mortality were so bad that the government decided on immediate action: it stopped publishing the statistics. Venezuela has obviously learned from this enlightened example: it, too, has stopped publishing the statistics on crime. No surprise really, as the murder rate is now twice as high as that of neighbouring Colombia, a country that is actually fighting a war against Marxist guerrillas. In 1998, before Chavez became president, 4,500 murders were recorded nationally, high, yes, but not nearly as high as the 19,113 who died last year alone,

President el Twit, who Twitters, as you may know, drones interminably on television and radio every week, though he has surprisingly little to say about crime. This is an admirable principle, that of see no evil, hear no evil, speak no evil. Unfortunately the benighted people of his socialist paradise both see and hear evil…everyday. It comes as no great surprise, therefore, that they are beginning to speak it also; they are beginning to speak evil of El Presidente. 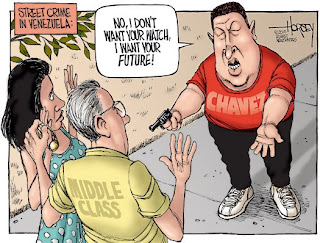 Again there is a solution: just pretend crime’s not there, that it’s all a media fabrication. Stop publishing the statistics, that was good, so far as it went. Even better, let’s stop the press reporting crime.

To begin with El Nacional, one of the main Venezuelan dailies, was barred from publishing any information about violence. Moving on from that, the government then stopped all print media from publishing any photos on the subject for a month. Why a month, you ask? Simple: because Hugo is facing some a rather awkward legislative election on 26 September, and would rather keep things as smooth as possible.

Of course there are other causes of crime, beyond press ‘fictions.’ Hector Navarro, spokesman for the ruling socialist party, says that crime is a product of the neglect of youth in BC, the time Before Chavez. In response Roberto Briceno-Leon, representing an organisation called the Venezuelan Observatory of Violence, has said that “they have a policy of blaming the previous government. But they don’t seem to realise that, after eleven years in power, they are the previous government.”

Still, look on the positive side: there may be some tourist dollars here. No need to bother with expensive clinics in Switzerland for assisted suicide. Come to Venezuela instead.
Posted by Anastasia F-B at 15:23