Battles then and battles now 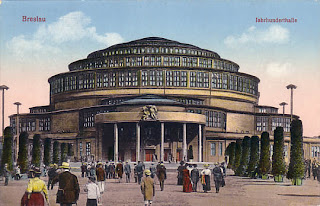 The Hala Stulecia – Centennial Hall – is among the more noted of the architectural features of the Polish city of Wroclaw. It belongs to a different time, just as it once belonged to a different land. Designed by the architect Max Berg, it was constructed in 1913 in what was then the city of Breslau in Prussia, firmly part of the German Empire.

Prussia and the German Empire are long gone but the Hala Stulecia remains, one of the first buildings to make use of reinforced concrete and now a UNESCO world heritage site. Renamed the Hala Ludowa – the Hall of the People – when the communists controlled Poland, it was neglected for years before a partial restoration was carried out in the 1990s, at which time it returned to its old name.

Now a second restoration is underway which should be complete for the building’s own centennial in 2013. At this point history, never that far from Polish consciousness, has entered stage right. The centennial of the building might be all very well but people are focusing on the original centennial, the anniversary that it was built to commemorate, a cause of some national discomfort. For, you see, the Jahrhunderthalle, as it was originally called, was built to commemorate one of the great events in Prussian and German history – the War of Liberation.

It was in Breslau in March 1813 that King Frederick William III issued his famous appeal, An Mein Volk (To My People), addressed to both Germans and Prussians, the first such in the history of the Prussian royal house, calling them to rise up against Napoleon. It was here also that the order of the Iron Cross was established, here where the national colours of black, white and red were unfurled in that summer of destiny. As Roger Moorhouse said in a recent issue of History Today, all of this gives Breslau as much right as any to be considered as cradle of modern German nationalism.

This is where the problem arises. For when it comes to German nationalism the Poles, the only country in Europe to mention Napoleon in their national anthem, have particularly unhappy memories. So a little storm has blown up, with articles appearing in the national press accusing Wroclaw’s mayor of “excessive pro-German sentiment.” It has even been suggested that the director of the project, Dr Hana Cervinkova, a Czech academic, is ‘unhinged.’

I suppose this was all to be expected, not just because the hall marks a uniquely German event but because the War of Liberation did not bring liberation to Poland. Still there is far too much immaturity here. The Hall marks a great event in European History which, although it belongs to a German past, is part of a Polish present and a Polish future.
Posted by Anastasia F-B at 16:16