Welcome to England, your Holiness 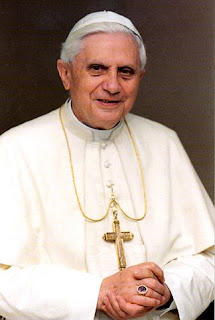 I am not a Catholic, but I grew up in a Catholic tradition; I grew up in the tradition of High Anglicanism, for which I retain a lingering affection, for the bells and the smells, for certainties presently being undermined by the intellectual confusion and the moral relativism of the leadership of the Church of England.

I went through a particularly pious phase in my mid-teens, a time when my imagination was being stimulated by the moral dilemmas explored in the novels of Graham Greene. It was a time when I seriously considered the possibility of taking that final step, of 'going over to Rome', even discussing the possibility of taking instruction from the priest attached to my school. I was only persuaded against it after some vigorous intervention from my parents, both staunch Anglicans, who even threatened to involve certain bishop, a close friend of the family! It worked, though I have since gone in other spiritual and religious directions, something, when it comes to my family, I rather keep to myself!

I mention this as a preamble to some things I would like to say about the visit of Pope Benedict XVI to this country, the first official visit by the head of the Catholic Church. I personally welcome this, welcome any attempt to heal the fractures in the Catholic tradition brought on by the Reformation. I welcome it all the more because of a ruthless press campaign focusing on the perceived failures of the Catholic Church over the appalling issue of the clerical sexual abuse of children. Yes it is appalling, but it seems to me that the press and television come not as doctors hoping to destroy a cancer but as undertakers hoping to carry off the patient, the patient being the Church itself. It's a campaign that gives solace to militant atheists like Richard Dawkins, heading a new legion of intolerant absolutists, advancing a new religion without meaning or without solace but just as certain in its secular dogmatism.

I have considerable respect for the present Pope, a quiet and reflective man. He does not have the charisma or the air of sanctity of his predecessor but there is so much wisdom to his message, both simple and profound, a message drowned out by the trumpets of misinformation and ignorance. To attempt to portray him as the head of a vast conspiracy of child rapers is malevolent in the extreme. Long before the present media frenzy over this issue he was at the front of a campaign in the Curia to compel the Church to face up to what he called the "filth" of clerical sexual abuse.

But I don't want to focus on this; I want to focus on Benedict as a man of ideas, a man deeply concerned by the growth of forms of relativism, cultural uncertainty and simple bad-faith that threaten not just the Church but the whole of Western civilization. What I propose to draw on here is a super piece in the current issue of Prospect by George Weigel (Britain can benefit from Benedict), in which he touches on some of the arguments the Pope advanced when he was still Cardinal Ratzinger. I don't want to overcomplicate matters but Benedict takes a position contrary to that advanced by Oswald Spengler, the grand ayatollah of cultural despair, in The Decline of the West. It really is true: civilizations do not die in a pre-ordained Hegelian path; no, they commit suicide. And that's what we in Europe and the Americas are doing: we are committing suicide. 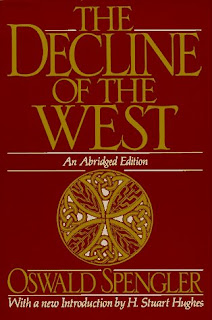 As Weigel says, the key to grasping Ratzinger's analysis is to see that "he thinks of Europe's contemporary crisis of cultural morale as a matter of self-destruction." In an address to the Italian Senate in 2004 he said with absolute precision, so far as I am concerned, that it is impossible not to notice a self-hatred in the Western world that is strange "and can even considered pathological." While it is praiseworthy to open to foreign values, he continued, the West "sees in itself only what is blameworthy and destructive and is no longer capable of perceiving what is great and pure."

The problem is that our understanding of European history, of the European mind, is clouded by a kind of blindness or, if you prefer, a cultural amnesia. It’s as if in looking back through the past we can see no further than the eighteenth century Enlightenment, to the so-called Age of Reason. Yes, it's a hugely limiting view, a hyper-secularist reading of the past, as Ratzinger put it, in which black legends of Christian perversity dominate the historical landscape. But at a time when the Classical inheritance was in danger of being lost European civilization was in part saved - as those who watched Dan Snow's documentary on the subject will understand - by Christian monasticism. It was the monks of Ireland, of Iona and of Lindisfarne who were the agents of cultural rebirth, tiny seeds of a mighty tree. I would add that the story of England, English history itself, began with a monk- Bede of Jarrow, to whom I at least cannot be other than hugely grateful. The Ecclesiastical History of the English People remains one of my favourite books.

Ratzinger's argument gets even more subtle, touching on dimensions I had never considered. It was Christianity, he argues, that initially suggested and defended the separation of Church and State, something prized by contemporary secularists. Pope Gregory VII, one of the greatest of the Medieval pontiffs, staked so much on this essential point, refusing to give way to the Emperor Henry IV's attempt to turn the Church into a department of state. So the history of European culture is impossible to contemplate without the church, without the influence of the church, an alternative to naked secular power.

It should not be assumed that his argument is anti-Enlightenment in the way that so much of the Enlightenment argument was anti-religion, far from it. Rather rationalism, on its own, is not enough to sustain confidence in reason, a wonderful paradox. For Ratzinger, Western civilization is sustained by three-legs, legs that might be labelled 'Jerusalem', 'Athens' and 'Rome'; by notions of individual uniqueness and value, of rationality and of law. If Jerusalem goes Athens is uncertain; if Athens goes Rome -the rule of Law- will inevitably follow. Look at Ratzinger's own Germany, the experience of his own life-time, where the Weimar Constitution, constructed on perfectly rational principles, was overwhelmed by atavistic nationalism, a flight from morality, from religion and from reason.

In the same year that he spoke to the Italian senate, Cardinal Ratzinger also took part in a debate with Jurgen Habermas, the doyen of post-war German radical philosophy, in which he argued that the prime cultural imperative of the time was to recognise the necessary relationship "between reason and faith and between reason and religion." It's a way of combating the nihilism, the scepticism and the relativism that have done so much to undermine a proper sense of ourselves, of who we are and where we are going. I agree that, in terms of historical development, we are now at the same stage as the late Roman Empire. Cardinal Ratzinger put it thus;

Europe is infected by a strange lack of desire for the future...There is a clear comparison between today's situation and the decline of the Roman Empire. In its final days, Rome still functioned as a great historical framework, but in practice it was already subsisting on models that were destined to fail. Its vital energy had been depleted.

But there is no inevitability here. As I said, he rejects Spengler's thesis, which always seemed to me to be a form of Marxism for the petty-bourgeois, hardly surprising when he and Marx more or less drew on the same philosophical sources, the same tiresome teleology. Instead the Pope urges that the revitalisation of our culture through creative minorities and exceptional individuals, the very anti-Spenglerian argument put forward by Arnold Toynbee in A Study of History. How absolutely delightful to discover that at least one person is reading and drawing inspiration from Toynbee! 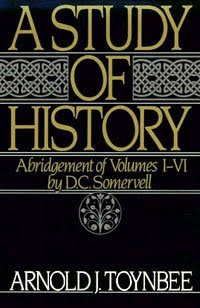 For Benedict, as Weigel stresses, the Catholic Church is one of those "creative minorities" in twenty-first century Europe and throughout the West. It has to have a certain sense of what it is, of what its purpose is, what its mission is, of ridding itself of the corruptions against which the Pope has been arguing for so long. It means putting behind the "liberalism" in religion so deplored by John Henry Newman. I simply can't take issue with this, because religion surely is about clarity of direction, of clear and simple messages. After all, just as liberalism eats away at civil society, reducing it to a confusion of relativism, where one idea or practice is as good as another, so liberalism and drift have eaten away so much of the Church of England, leaving a husk, grand and sad at one and the same time.

Yes, we all need faith, faith in ourselves, faith in our culture, faith in our civilization. For all its faults simply cannot imagine Europe without the Catholic Church. Oh, but I can, a Dawkins Europe, a Europe sinking faster into a quicksand of doubt and destruction.

Welcome to England, your Holiness.
Posted by Anastasia F-B at 16:01