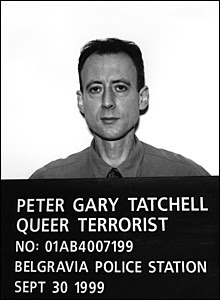 Is it wrong to say that I find this man, this relentless self-publicist and secular martyr, a fatuous and tiresome bore? I suppose people will assume that I’m opposed to gay rights, because that’s his principal platform. No, I’m not opposed to gay rights; I’m just opposed to Peter Tatchell, this homo who is a no no, this bore who himself has become the medium and the message. He’s the one person who almost makes me feel sympathetic towards Robert Mugabe, Zimbabwe’s thuggish dictator, and Nick Griffin, the equally thuggish leader of the British National Party (please note I wrote almost!)

When I see Tatchell I see hectoring self-righteousness; I see a prig who would reshape the world in his utterly tiresome image. I also see a self-serving hypocrite, but let me hold on that for a moment or two. Did you know that he is a member of the Green Party? More than that, he insists that he is on the ‘left wing’ of the Green Party. This immediately prompts one to ask if the Green Party is sane enough to have a right wing? Perhaps it does: perhaps there are those among the membership who think it’s a bad idea to have wind farms in back gardens up and down the land, perhaps there are those opposed to such communal delights as compulsory tofu Sundays.

OK, let me pause here: this is a waste of time, a spot of harmless fun, but still a waste of time. Saint Peter is not really worth such trouble, such a fuss about nothing. It’s just that the recent visit of Pope Benedict drew my attention to something else about him, and here I take up the cudgel of hypocrisy.

For Tatchell the Catholic Church is yet another ‘bad thing’. After all it’s filled with paedophile priests, men who have sex with children, we all know that; and even if we did not Tatchell took the trouble to remind us prior to the visit. He has also helpfully described the Pope as “the ideological inheritor of Nazi homophobia”, not a Catholic, not a Christian, just “the ideological inheritor of Nazi homophobia.” Is this simply because he is a German, or do I assume that every Pope since Peter (and here I really do mean Saint Peter) was the ‘ideological predecessor of Nazi homophobia’? Perhaps the Bible counts in this bizarre notion as the forerunner to Mein Kampf?

Anyway, the thing is, for Saint Peter (back to Tatchell), all tribes are equal but some tribes are more equal than others. Boy love is one thing in the Catholic Church, quite another among New Guinea tribesmen “where all young boys have sex with older warriors as part of their initiation into manhood and grow up to be happy, well-adjusted husbands and fathers.” Yes, I expect they do. His holiness goes on here in a letter he had published some years ago in The Guardian;

The positive nature of some child-adult sexual relationships is not confined to non-Western cultures. Several of my friends – gay and straight, male and female – had sex with adults from the ages of nine to 13. None feel they were abused. All say it was their conscious choice and gave them great joy. While it may be impossible to condone pedophilia, it is time society acknowledged the truth that not all sex involving children is unwanted, abusive and harmful.

And he, of course, would be the arbiter here, as he is in so many other areas of life, over what is harmful and what is not. So, yes, he does not condone pedophilia, he just thinks it’s alright for nine-year-old boys to have sex with men, allowing them to grow up to be “happy, well-adjusted husbands and fathers”, or even people like, say, Peter Tatchell.

How shall I finish? Well, I rather like the following response to an online Tatchell sermon by someone signed simply as ‘Derek. Go for it Derek!

Why doesn't Tatchell just get lost? He's got a minority point of view, represents nobody, stands for nothing, has no following, sounds empty and vacant, is self obsessed and is a shameless self-publicist. His entire life seems to revolve around sexual persuasions - what a total bore. He counts for nothing. Can you imagine going out for a beer and finding Thatchell sitting next to you? Ugh! You would simply have to "make your excuses and leave" - which he would, of course, construe as "homophobia" ... No ... It's not homophobia Peter- it's simply disinterest in him. Tatchell ..... Do yourself and everyone a favour. Go away!!!!

Hmm, sitting in a pub beside Peter Tatchell. I would not say that it would be a fare worse than death…it comes close, though, it comes close. :-)
Posted by Anastasia F-B at 16:12