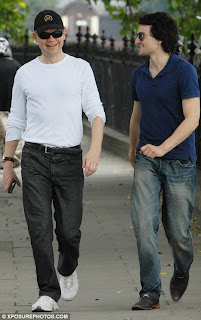 William Hague, the British Foreign Secretary, is going through a ‘little local difficulty.’ Though married, there have been persistent rumours on the internet that he has a gay past, fuelled by the fact that he shared a room with a male aide half his age during the general election campaign earlier this year.

This suggests to me one thing and only one thing: that for a senior politician he is extraordinarily naïve, a bear of very little judgement, a bit of a liability given the responsibilities his office carries. Perhaps, on reflection, it suggests something else: that there was nothing in the least untoward in his sleeping arrangements; that he is definitely not homosexual. If he was he and the aide, who has since resigned, would surely have been a lot more discrete. Surely, they would?

But there are other things I have to say here, other things I’ve been reflecting on after reading the coverage of this story in the weekend press. What I am about to write makes me far from comfortable, because I would rather not do or say anything that would in an any way compromise the government of David Cameron. Read on at your peril but let me rush to my conclusion by saying that I think Hague, now aged forty-nine, is in the grips of a mid-life crisis, except in his case it began when he was sixteen, a crisis that raises serious questions about his state of mind and his capacity for high office. It’s now an open question whether he is fit to continue as Foreign Secretary.

To begin with I care nothing at all about his sexual preferences. While the rumours must be hurtful for Ffion, his wife, he can sleep with Men, Martians or Moonies if he pleases: it would not make a bit of difference to me so long as it had no bearing on the conduct of his public office (well, OK, I might worry slightly about the Moonies.)

Also I should say that I quite admire Hague as an intellectual and a writer. He is as passionate about the political history of the eighteenth century as I am about that of the seventeenth, and has written commendable biographies of William Pitt the Younger and William Wilberforce. I just wish to God that he had grown up, showed as much maturity in public life as he does in the life of the mind.

Now none of this matters. His whole career has been called into question less by the internet rumours - all so much stupid and malicious fluff - more by his public rebuttal of these rumours, rebuttals in which he made some deeply personal and wholly unnecessary revelations about his marriage. His wife, he said in his official statement, has suffered numerous miscarriages in their frustrated attempts to have a child. I could make no sense of this at all. Yes, I felt sorry for them, but what on earth was the relevance of this information?

Writing in The Telegraph on Saturday Simon Heffer immediately sent the point into sharp relief: the wholly gratuitous statement about her miscarriages was an abominable abuse of her in the interests of his political career. More than that, the sub-text was blatantly clear – I’m just another one of the lads; I can get a woman pregnant heaps of times; I’m no homo.

Yes, I’m sorry, it’s appallingly distasteful, but it’s evidence of his mindset and his insecurity. This is the same man, a middle-aged, baseball-cap wearing perpetual teenager, clearly uncomfortable with his baldness, who claimed, when he was leader of the Tory Party, that he drank fourteen pints of beer a day as a teenager. I’m William Hague, I am; I’m one of the blocks; I can drink fourteen pints a day; I can get women pregnant; I’m from oop north.

This is the key, that and the fact that he has been trying to live down a nerdish appearance at the Conservative Party conference when he was sixteen. In the same edition of The Telegraph Damian Thompson, a contemporary of Hague’s at Oxford, described him in his student days as a ‘professional northerner’, one of the wisecracking Yorkshire lads who could even charm baby-eating members of the Socialist Workers Party.

There was no irony here; the article was sympathetic and supportive, but Thompson has given away more than intended about Hague and his self-perception. What on earth is a ‘professional northerner’? Is there a qualification, perhaps? I’ve never heard anyone described as a ‘professional southerner’, so it’s clearly no more than a badge of condescension, one that Hague seemingly wears with a degree of pride, fourteen pints a day and on and on. Forgive me; I’m just a sharp-talking professional Surrey girl with a sauce of London spice, fourteen Pimm’s a day, don’t you know.

The whole thing is such a massive joke, a joke made by Hague about Hague, a joke at his expense. The rumours were nothing; his sexuality is nothing; his statement and his conduct are everything. Yes, it began as a little local difficulty but he has allowed it to spread rapidly. I no longer believe that England’s foreign relations are safe in this man’s hands, both because of the weakness of his character and the weakness of his judgement, compounded by his personal vanities and insecurities.

William, take your baseball cap and your naff wrap-round shades and go. Depart; I say, and let us have done with you. In the name of God, go!
Posted by Anastasia F-B at 11:39