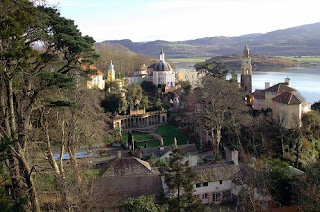 Portmeirion is one of my favourite Welsh villages, except for the fact that there is nothing Welsh about the place and it’s not really a village at all but an incredibly surreal resort and hotel! It’s certainly in Wales, in Gwynedd, to be precise, though it’s oddly out of place, beautifully situated, as it is, on the Dwyrd Estuary.

I've stayed there and I just love the design, the layout, the atmosphere and the setting. Designed and built by Sir Clough William-Ellis supposedly in the style of an Italian village it resembles no Italian village that I’ve ever seen, no, not even Portofino! But it has a generally exotic atmosphere suggestive of different worlds and distant places, a kind of Platonic Mediterranean settlement, an ideal, if you like, in stone. I was there under a leaden sky, not a southern one, which simply added to the charm and general sense of unreality.

It’s an inspiring place. It inspired Noel Coward to write Blythe Spirit while he was staying there. Film makers have used it as a location, no doubt because it is here and nowhere at one and the same time, suggestive of different times and other dimensions. It was used once in an episode of Doctor Who, the long-running BBC sci-fi series.

However, it’s probably best known as “The Village” in The Prisoner, a 1960s spy drama starring Patrick McGoohan, a show which subsequently inspired a cult following. Portmeirion still hosts annual fan conventions and not far from the entrance there is a shop, once serving as McGoohan’s home in the show, which sells Prisoner souvenirs. I’ve seen a couple of episodes of the series and while it was probably quite innovative and challenging for the day it seemed to me like so much hyper-active nonsense, George Orwell by way of Magical Mystery Tour, the sort of thing that I’m sure went down very well in the swinging psychedelic sixties! 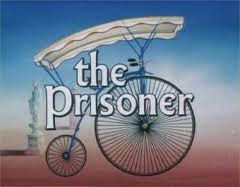 I’m not going to go over the plot in detail, and I’m sure some of you may know the general premise, if not from the original then from a recent remake. In short it concerns an agent who resigns from his job suddenly and without reason, only to find himself captive in a mysterious community, a sort of upmarket holiday camp where everyone is simply known as a number. There the authorities try to extract any residual secrets from McGoohan, known simply as Number Six. Refusing to give away anything, and asserting that he is not a number but a free man, he attempts to escape only to be pursued by – wait for it – a giant balloon!

Still, for all its nonsense, the producers could not have chosen a better setting for their bogus metaphysics, a dream within a dream. If you've never been do go. I’m sure you will love the place as much as I love it. Be seeing you. :-) 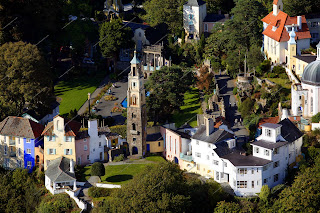