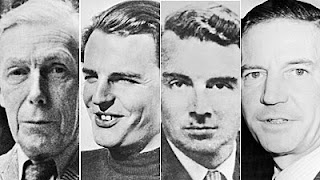 I started to read an article on Kim Philby, one of a small and notorious group of Cambridge alumni who spied for the Soviets before, during and after the Second World War, but I gave up because the treatment – an insider account of spying techniques and protocol – bored me.

I did, however, cause me to reflect more broadly on Philby and his fellow spies, a group that both fascinates and repels me at one and the same time. A lot has been written about the motives of these people, though it seems to me that one dimension has always been overlooked, or simply not given enough emphasis.

Struggling to find the right words, I would define it as the exclusive within the exclusive, clumsy, I know, but it may go some way to offering a slightly fuller explanation. You see, as far as I can determine, it was not all down to politics: it was down to being different; to feeling different from one's class and one's community, and taking pride in this difference.

They were, if I can put it like this, 'outside insiders', flattered by the attentions of the Soviets; pleased to be serving a wider cause; pleased, in the end, to be serving themselves, their egos and their particular, narrowly-defined ends. Empty vessels waiting to be filled, they were the Swallows; all the others were the Amazons. It was a game; once begun, it could not be stopped.
Posted by Anastasia F-B at 16:21