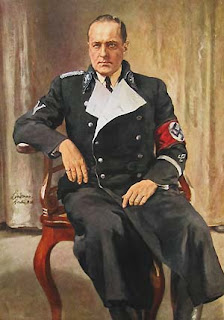 Walter Darré, a leading member of the Blut und Boden (Blood and Soil) movement, and later Nazi Minister of Agriculture, deserves to be better known as the father of Green Fascism. There are many aspects of this thinking that could quite easily be fitted in to the Ecology Movement. For example, in his capacity as Reich Minister for Agriculture, he was an early exponent of organic farming. When one strips away the racism from Blood and Soil and the other aspects of his oeuvre, then the familiar patterns emerge: the need for new farming techniques; a radical rethinking of the links between agriculture and industry; he even called for an end to 'globalisation', though in a different form of words!

His first moves as Minister of Agriculture was to introduce security of tenure for medium and small farmers, followed by the implementation of a fair pricing system for their produce. He also wrote a series of articles, including one on the dangers of erosion. It was his view that soil was a living organism, part of a cycle of growth and decay, which, if misused, would have a serious impact on the quality of the food produced He was thus opposed to intensive forms of industrial farming and the unrestricted use of insecticides and chemical fertilisers. The problem for him was that his ideas on food production and the environment were at variance with the ultimate needs of the German war economy, and he was demoted in 1942.

After the war he continued to defend and promote his ideas on small-scale and sustainable farming, including an attempt to found a society for the protection of the environment, right up to his death in 1953. I have a feeling that Prince Charles and Darré would have got along just fine.
Posted by Anastasia F-B at 17:31