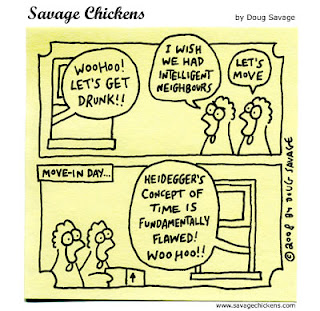 Language was one of Martin Heidegger's central preoccupations. In A Dialogue on Language he wrote "Language is the house of being. Man dwells in this house...In language there occurs the revelation of beings...In the power of language man becomes the witness of Being." Being or Dasein-the central concept in his ontology-is revealed through language.

He also spends time discussing the vacuity of ever-day language, where words lose meaning through overuse. One only has to consider here the use of 'love' in relation to all kinds of experience and tastes, so much so that the original intensity of meaning has been sucked dry. Heidegger says that the key to self-understand is to rediscover the original link between the word and the experience, when, as he puts it, 'Being first spoke' in words like 'peace', 'love', 'truth' and 'compassion'.

It is in the area of the Language of Being, in Heidegger’s own philosophical vocabulary, that his thinking tends to become particularly opaque. His use of all sorts of obsolete and compound expressions makes the English translation of his work problematic, particularly that which he wrote after Being and Time. It's only for the most determined of Beings in the world! :-))
Posted by Anastasia F-B at 16:49