Procopius and the Monstrous Regiment of Women 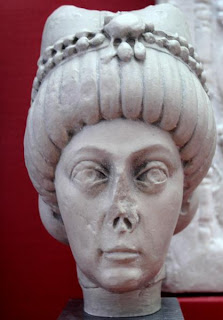 Perhaps the best verdict ever passed on Procopius' The Secret History was that supplied by the author himself, who wrote of his fear that later generations would condemn him as "a narrator of myths...neither credible nor probable." And he is quite right: parts of it are so fantastic that they quite simply defy belief. It is perhaps best seen as a bad-tempered narrative, a corrective to his public adulation of the Emperor Justinian, that of necessity had to remain secret, pointing out the various failures of his reign, including the superficial nature of his western reconquests. Unfortunately he goes too far in his anger, mixing the critical with the fantastic.

But the real source of his animus can be traced to the great transitions in Roman society, transitions that saw the decline of traditional elites and the older self-reliant forms of urban government. For Procopius the source of this moral and political decay is to be found at the very heart of Justinian's government, particularly in the power and influence enjoyed by women like Antonina, wife of Belisarius, and, above all, the Theodora, both of whom, in defiance of all of the ancient traditions, had been admitted to senatorial rank.

It is in his descriptions of Theodora that Procopius is at his most scurrilous, his most vindictive, his most pornographic...and his most misogynist. And it is this-simple misogyny-that provides one of the most important keys for reading a work that was written as an intellectual safety valve for an angry and frustrated man. Theodora has become in his eyes the personification of all that is wrong with the Roman world. The irony is that his invective simply served to make her one of the most memorable figures in Byzantine history.
Posted by Anastasia F-B at 16:29