Time for another Tea Party!

I have a keen interest in American constitutional history. I’ve read some of The Federalist Papers, the more important documents among them, and know how fascinating they are, how the Founding Fathers grappled with some of the great issues of politics and governance that faced the new nation. The arguments forwarded by James Madison in favour of checks and balances are of enduring relevance.

The essential point is that Americans, supposedly having overthrown one ‘tyrant’ in the form of George III, were reaching for a way of ensuring that a republican tyranny did not rise in its place; that a new monarchy, in other words, did not arise from the office of President. But, my, my, how Madison, Jefferson and Franklin would be shocked to see how that office has both expanded…and degenerated.

In 1776 George III’s power, the power held by the English monarchy as an institution, was in steady decline, devolving by degrees to Parliament and the office of Prime Minister, a process that would continue throughout the nineteenth century. Now, by way of contrast, look at America, look how the country’s political institutions have evolved since the Revolution. There the Constitution has in theory and practice enshrined monarchical power, enshrined, if you like, the monarchy of 1776. Now, I ask, is there any greater paradox or irony than that?

Let me deal with some specifics. The Presidency has become monstrous, a reflection both of the times and the office. In the nineteenth century the American Whig Party was formed to challenge what they perceived as the growing autocracy of ‘King’ Andrew Jackson, recalling the struggles of the seventeenth century English Whigs against the absolutism of the Stuarts. My, how far things have gone since then. A King, a mere King? Why, that’s far too modest. Super Obama has gone that one step further, at least he has according to Newsweek, which described him as “…above the country, above the world; he’s sort of God.”

Alas, I shall ever be the prophet unarmed, a Cassandra in the wilderness but I love America, a kind of second home for me, so I will say it: Super Obama is going to let you down and let you down badly; he is not God; he is not even a King, though he has all the power of one: he is all promise and no substance. There is nothing behind the repellent personality cult that has been woven around this wooden titan. But Newsweek says he is God, and I rather suspect Obama thinks he is God as well. Look at those big divine promises: he is going to overhaul health care; he is going to create millions of jobs, he is going to cure cancer; he is going to rid the world of nuclear weapons and so on and so on and so on. The Promised Land is there before you, is it not? The problem is that it flows not with milk and honey but with empty words and windy rhetoric.

Still, the expansion of executive power is real enough, threatening to invade areas that even FDR dared not touch. I do not think you will end up any better off, and I do not think that Super Obama will ever be able to make good on his ludicrously inflated promises; but there are still genuine dangers to your liberty, dangers that the Founding Fathers would have been acutely aware of. The danger is not in Obama himself; he is just the fool who paves the path to hell with good intentions. The danger comes from behind, from the populism that pushes him forward in his divine mission, the populism uncorked by his demagoguery. 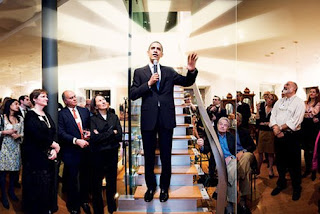