Vox in Excelso-the end of the Knights Templar

Vox in Excelso was an edict issued by Pope Clement V in March, 1322 which marked the end of the Templar Order. The following extract details their principal 'crimes', brought to Clement's attention by Philip IV of France.

Indeed a little while ago, about the time of our election as supreme pontiff before we came to Lyons for our coronation, and afterwards, both there and elsewhere, we received secret intimations against the master, preceptors and other brothers of the order of Knights Templar of Jerusalem and also against the order itself. These men had been posted in lands overseas for the defence of the patrimony of our lord Jesus Christ, and as special warriors of the catholic faith and outstanding defenders of the holy Land seemed to carry the chief burden of the said holy Land. For this reason the holy Roman church honoured these brothers and the order with her special support, armed them with the sign of the cross against Christ's enemies, paid them the highest tributes of her respect, and strengthened them with various exemptions and privileges; and they experienced in many and various ways her help and that of all faithful Christians with repeated gifts of property. Therefore it was against the lord Jesus Christ himself that they fell into the sin of impious apostasy, the abominable vice of idolatry, the deadly crime of the Sodomites, and various heresies. Yet it was not to be expected nor seemed credible that men so devout, who were outstanding often to the shedding of their blood for Christ and were seen repeatedly to expose their persons to the danger of death, who even more frequently gave great signs of their devotion both in divine worship and in fasting and other observances, should be so unmindful of their salvation as to commit such crimes. The order, moreover, had a good and holy beginning; it won the approval of the apostolic see. The rule, which is holy, reasonable and just, had the deserved sanction of this see. For all these reasons we were unwilling to lend our ears to insinuation and accusation against the Templars; we had been taught by our Lord's example and the words of canonical scripture. 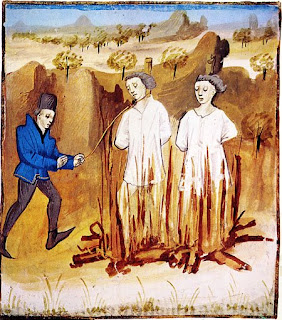