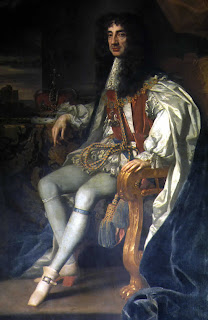 So, what was Charles really like as a man and a ruler? The early Whig historians had no doubt about this, going so far as to describe him as one of the most criminal princes in all of English history, whose reign was, in the words of one, 'a disgrace to our country.' The 'Merry Monarch' school grew up as a corrective to this rather dour reaction. The truth is closer, I suppose, to the Whig view: Charles was far from admirable as a man, showing many of the worst personality traits, including cynicism, meanness and simple dishonesty.

His reign was also far from admirable, a time when England was at its lowest point in Europe, judged in political and military terms. He began his reign with every possible advantage, including a Parliament solidly behind the throne. Yet, within a few years of the Restoration, growing distrust of the court, and of Charles' motives and policies, led to a poisonous political atmosphere, which finally came to a head in the Popish Plot, the greatest political crisis of the reign. Charles' rule in Scotland, moreover, was marked by brutality and increasing religious persecution; a time when methods were used to suppress dissent later perfected on the Continent by Louis XIV. Above all, his foreign policy, and his military campaigns were disastrous. Writing about the Raid on the Medway, one poet managed to combine comment on this with the king's well-established reputation for debauchery;

So our great prince, when the Dutch fleet arriv'd
Saw his ships burn and, as they burn'd, he swiv'd.
So kind was he in our extremist need,
He would those flames extinguish with his seed.

Yet, having said this, while Charles was often responsible for the troubles of his reign, he had the political and personal skills to end these troubles to his advantage, skills which his father and his brother so obviously lacked. By this measure, and by this measure alone, his achievements are worthy of note, allowing him to end his reign in relative peace. He was at his best, his most skilful, during the tensions induced by the Popish Plot, giving way when he had to give way, standing strong when he had to stand strong. In the end he completely outmanoeuvred his opponents, the great combination known as the Whigs, which had grown up to oppose the policies of the throne, and might very well have destroyed the monarchy itself. And this was no mean achievement; for it involved the defeat of Anthony Ashley Cooper, 1st Earl of Shaftesbury, one of the first truly great party leaders in English history; a dangerous politician and a dangerous man.

Charles greatest talent, his genius, perhaps, was in his appreciation of the realities of political power within his three kingdoms. Here his sense of realism and, indeed, his cynicism, worked to best effect, allowing him to play the system to the advantage of the Crown. He was also arguably the first king in English history to understand the importance of appealing to and managing public opinion. He was a survivor, which is probably the greatest compliment one can make about any Stuart king on the English throne!
Posted by Anastasia F-B at 19:11