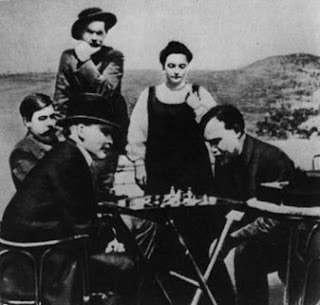 Lenin and Maxim Gorky had a long acquaintance, and shared some general ides, but their individual visions were quite different. Gorky's idea of revolution was much more bound up in notions of brotherhood and freedom, which had very little in common with Lenin's political dialectics, or with his notions of party discipline. Gorky admired Lenin's intellect but hated the way in which he constrained the complexity of life into a narrow set of abstract theories.

The two men first clashed over politics, and the future course of the revolution, in 1909 and 1910, specifically on the question of workers' education. For Lenin the workers had no value as an independent cultural force, but only as disciplined cadres of the party. But Gorky, along with Alexander Bogdanov and Anatoly Lunacharsky, saw Marxism as a form of religion, to be expressed in new forms of comradeship and union, a theme he takes up in Confession, his novel of 1908. It's hardly any great surprise, then, that Gorky did not settle down comfortably with the form the Revolution took in Russia after November 1917.

In Novaya Zhizn-New Life-, the independent socialist newspaper he published in Petrograd in 1917 and 1918, Gorky time and again challenged the brutishness he saw around him in his Untimely Thoughts column, describing it as an outburst of 'zoological instincts', of ancient hatreds given life by the brutality of the war and the rhetoric of the Bolsheviks. The crushing of the Kronstadt Rebellion and the Red Terror further underlined that the Bolsheviks would not be diverted from the most oppressive forms of dictatorship. But what he found most intolerable was the government's indifference to the famine brought on by the forced grain requisitions of War Communism. He finally decided to go into exile, an action that Lenin had been urging upon him for some time.

The ambivalent relationship he had with Lenin-one of love and one of hate-was fully evident after the latter's death in 1924. It left Gorky with feelings of guilt and regret; with a painful sense that there were issues between the two which could now never be resolved. Soon after he wrote to Romain Rolland, saying "Lenin's death has been a very heavy blow for me. I loved him. I loved him with wrath." It was to cause him to reassess his whole attitude towards the Bolshevik Revolution and all that followed; that Lenin had been right and he had been wrong. It was the beginning of a new path of self-deception.
Posted by Anastasia F-B at 17:47