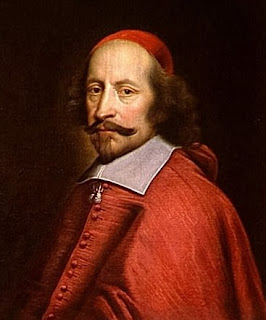 I've always found Cardinal Mazarin and intriguing and complex figure in much the same fashion as England's Cardinal Wolsey, servants of the state first and of God second.

Was Mazarin a disciple of Machiavelli? He certainly gives all of the outward signs of being so, an exponent of the arts of political realism, not over-troubled, perhaps, by more general ethical considerations. I'm not sure, though, what the alternative would have been to a policy that ensured the integrity of the French state at a point where it was threatened with political fragmentation. He was, moreover, one of the best statesmen and diplomats France ever had, guiding the country through some difficult times.

As far as religion is concerned, well, Mazarin was always more secular than spiritual, a Cardinal who never became a priest. He was no purist and no crusader, and was even prepared to do business with such noted anti-Catholics as Oliver Cromwell. It was all part of his pragmatic character, in which doctrine, and the imperatives of orthodoxy, played very little part.

Yet on his death he left 600,000 livres to help finance a crusade against the Ottoman Turks. Was this an act of a bad conscience? Perhaps; we will never know for certain. What we do know is that he was revered by Louis XIV and died a well-respected figure, unlike his unfortunate English counterpart. Of Mazarin it was said in 1661 "No one left his presence without being persuaded of his reasoning and struck by his graciousness. His intentions were good; he could never say evil of anyone...and was unable to hate even his own enemies." Not a bad epitaph.
Posted by Anastasia F-B at 17:10