Mini-Metternich: in Memory of Engelbert Dollfuss 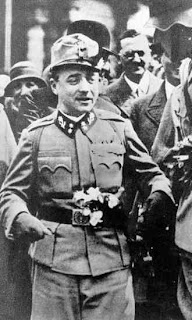 There is a good article in the current issue of History Today on Engelbert Dollfuss by A. D. Harvey, a timely reminder that this month marks the seventy-fifth anniversary of his murder at the hands of the Nazis.

Now almost completely forgotten outside Austria, Dollfuss was briefly dictator of that country in the 1930s, and founder of so-called Austro-Fascism. But, for all his faults, he deserves to be better remembered than he has. Not so long ago, in discussing his significance with an Austrian friend of mine, I was surprised and delighted to discover that he is often referred to in his homeland as ‘mini-Metternich’, a clear reference both to his diminutive stature and, perhaps, to his role in Austrian history. For just as Metternich did his best to save Austria in the nineteenth century, Dollfuss made a gallant attempt to save it in the twentieth.

Austria, the Republic of Austria, the country that emerged out of the chaos of the Great War and the ensuing collapse of the Habsburg Empire, was a no more than a grand imperial capital, Vienna, surrounded by a German-speaking hinterland. There was no sense of being Austrian as such. In the west people voted in an unofficial plebiscite to join Switzerland, while the rest of the country expected to be united with Germany, a move specifically forbidden by the Treaty of Versailles, in clear defiance of Wilsonian principles of self-determination. So Austria, as a nation, was left to find itself.

It did find itself, in a limping an uncertain way. A democracy took shape, with no firm roots, it is true to say, but it worked, up to a point. Two things caused the roots to be torn up, the onset of the Great Depression in 1929 and, of even greater danger, the appointment of Hitler as Chancellor of Germany in 1933. Austria was now sandwiched between the Fascist dictatorship of Mussolini to the south and the Nazi dictatorship to the north. It also had its own violent and unstable National Socialist movement, determined on union with Germany. It was in these circumstances that Dollfuss and his allies created Austro-Fascism, almost as a form of national self-defence.

Dollfuss, as a politician, was a pragmatist. As a man he had a strong Catholic faith. I personally don’t believe that he had any interest at all in ideology. Rather, he used ideology in a very pragmatic way. A dictatorship was created, yes, but how else was he to combat the Nazi government and party, the Austrian branch of which was banned in June 1933. He adopted the outward symbols, the uniforms and the flags, but only to draw closer to Italy as a counter to Germany. Dollfuss was the one man to recognise just how alike Hitler and Stalin were, and just how important it was to resist both Nazism and Communism. He could only do this with the assistance of Mussolini.

It might also be said that he served Austria in death. His assassination by a group of Nazi thugs on 25 July 1934 so angered Mussolini that he ordered a partial mobilization to counter any move by the Germans. Hitler backed down. And so Austria survived for another four years, survived for as long as Mussolini distrusted Hitler. Tragically that was to change, in part the result of a stupidly anti-Italian line later pursued by Anthony Eden and the mandarins in the British Foreign Office. Ah, but that’s another story altogether!
Posted by Anastasia F-B at 18:36