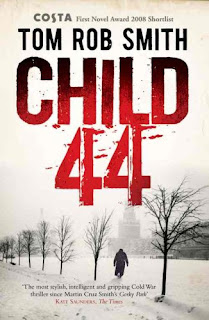 Earlier this year I wrote a blog headed A Forgotten Serial Killer, a brief account of the career of Paul Ogorzow, executed for the murder of a number of women in wartime Berlin, a piece I introduced as follows:

There are certain periods of history, and certain societies, that are, it might be said, defined by criminality. Stalin’s Russia and Hitler’s Germany are good examples of systems of governance where law, as it is commonly understood, only serves to demonstrate how little protection people have from the state that follows no objective moral standard.

The Ogorzow case showed how law-enforcement, the ordinary process of law-enforcement, can be distorted and corrupted by entrenched ideological preconceptions. I find this whole area quite fascinating, the way in which ‘normal’ crime is perceived in abnormal societies, societies where crime is viewed chiefly in political terms. It was this interest in this aspect of the pathology of dictatorship that drew me to Child 44, a debut novel by Tom Rob Smith, longlisted for the 2008 Man Booker Prize.

I have the novel before me, the paperback edition, covered in lavish praises from a number of sources, the usual over-the-top hyperbole that publishers love. The most restrained, I’m pleased to say, is the quote from The Telegraph, which describes it as a “…superior commercial thriller.” And that’s exactly what it is: a superior commercial thriller, nothing more; it does exactly what it says on the tin!

Yes, yes, the usual clichés apply: it’s well-written, fast-paced, a real page turner and so on, and so on, and so on. But-and I genuinely hate to strike a sour note-it simply does not deserve the praise that has heaped upon it; for it opens with high promise and closes on low disappointment. So much reviewing now reminds me of what George Orwell wrote in his essay, In Praise of the Novel. The novel, he said, “is being shouted out of existence.” Child 44 is, I think, probably typical of most of the works that are shouted on to the Man Booker list, long or short: it’s not a bad book; it’s just not a very good one. In a way it’s a pity; for with a little more work it might very well have been a good book, perhaps even a great one. More, anyway, than a superior commercial thriller.

It’s based very loosely on the career of Andrei Chikatilo, an infamous serial killer of Soviet times known as the Butcher of Rostov or the Rostov Ripper, responsible for the deaths of fifty-two women and children. The main action opens in Moscow in early 1953, just before the death of Stalin, and continues to the summer of that same year. The principle character, the hero of the book, is one Leo Demidov, an officer in the MGB, the post-war metamorphosis of the NKVD, the state security apparatus originally set up by that sociopath Felix Dzerzhinsky, the Bolshevik Torquemada, under the Cheka appellation. Demidov is not a policeman as such, for the real police, the militia, those who deal with day to day law and order, have a very low status in the perfect society, a society where crime officially does not exist.

When it comes to the politics of Soviet security, the brutality, the indifference to life, the moral decay, the fear induced and corruption involved Smith has mastered his brief with commendable skill. There is little to fault the historical setting and the mood he sets. I have to say, though, that I personally found Demidov, as a character, just a little too naïve, not really the sort of man one would expect to advance very far through the ranks of the cynical and the sickening. Quite frankly he’s too much of an empiricist; he doubts where only faith is required

Refusing to denounce Raisa, his own wife, as a dissident, Demidov is demoted, transferred to the lowest grade of the militia and sent with her from Moscow to Voualsk, a bleak industrial town in the Soviet Urals. This process is spurred on by the malevolent Vasili, his second-in-command, who acts partially out of ambition, partially out of hatred.

Anyway, bit it by bit Demidov is forced to question the assumptions on which his life and career has been based when he investigates a series of gruesome murders, where the state refuses to recognise that a consistent and abnormal pattern is emerging. In his new post, and with the eventual help of his chief, he uncovers more and more bodies, all killed in the same fashion. The first case he dealt with in Moscow, the death of a child of a colleague, quickly dismissed as an accident, turns out to be the fourth-forth in a series, hence the title of the book.

So far the story has been reasonably well structured. The reader is quickly carried along by the plot, one that does no great harm to history, geography or believability. But now, for reasons that are not entirely clear to me, Brown turns from drama to farce.

We know from information uncovered by the militia chief that the murders, which take place along the Russian railway network, are most heavily concentrated in and around Rostov-on-Don. Demidov and his wife go back to Moscow with false papers, hoping to obtain a description of the killer from a woman who may have seen him with the little boy murdered in the city. Here he himself murders one Ivan, a friend of his wife, who turns out to be a snitch, although the MGB never seem to connect him with the crime. He and his wife are arrested on returning to Voualsk, sent to the Lubyanka in Moscow for interrogation (it turns out that Leo is not Leo at all) and then packed off to Siberia for discrediting the Soviet state. They manage to avoid being murdered on the train-a plot devised by the evil Vasili-, escape by digging up the floorboards of their cattle-truck carriage and dropping on to the line. Yes, that’s right!

Once free they make their way from the east down to Rostov, a huge distance, with the help of benign peasants along the way, avoiding all of the efforts of the MGB to intercept them, avoiding being denounced in a society where fear and denunciation were modes of survival, as the author made clear at the outset. The express rushes on; Smith is in a hurry to finish; Midsummer Murders clashes and blends with Nineteen Eighty-Four by way of Emmerdale Farm ( and who would have thought that a kolkhoz could turn into that!). It’s chaotic, breathless, unbelievable, schoolboy stuff; a tale of the wild east!

No, I’m not going to tell you who the murderer is, though the more perceptive who read the book will have guessed by reflecting back on the opening pages, set in the Great Famine of the early 1930s. Let me just say that the whole case, murder after murder, grim in every degree, turns out to be no more than a grand form of attention-seeking! When the perpetrator is finally tracked down he says-and I had already anticipated this-“What kept you?” Oh dear! Demidov triumphs, Vasili is disposed of, and the criminal turns out, at least according to the authorities, to be an aberration, a man operating under the influence of the decadent capitalist powers. Please, be warned: this is not Gorky Park!

I understand that Ridley Scott, the director of Gladiator, has obtained the film-making rights to Child 44. I’m glad, because I suspect it will turn out to be a far better movie than a book, much like All Quiet on the Western Front and Remains of the Day.

Look, I’m pleased that I read it and I really hope that I haven’t put potential readers off by what I’ve written here, more negative, I think, than I had intended. Never mind me; go with The Independent, which shouts at you that this book “...has everything you could wish for…and more.” All I will say is that I did wish for more…and didn’t get it. The author has promise, but the promise needs to mature. Please, Tom, don’t be seduced by the hype.
Posted by Anastasia F-B at 10:57