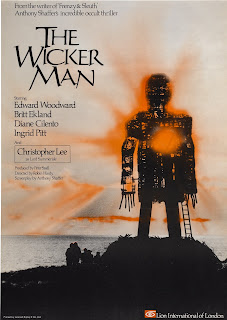 If you go to my profile page here you will see that I’ve listed The Wicker Man as one of my all-time favourite movies. I do stress that this is the 1973 original directed by Robin Hardy and written by Anthony Shaffer, not the ghastly 2006 remake with Nicholas Cage. The movie recently came up in a discussion on Blog Catalogue in a post by my friend Yun Yi. So, taking my cue from this, I thought I would say a little more on the subject, really just to clarify any confusion that might remain.

To begin with I’m not quite sure exactly when I first came across it. It was on television, certainly, but how, where or when I simply can’t remember. What I do remember is that I made a huge impact on me (I was just beginning my flirtation with witchcraft and paganism), particularly the ending, when Neil Howie (Edward Woodward) is sacrificed by a modern-day pagan community, anxious to appease the gods of the earth and thus ensure a fruitful harvest. I’ve watched it dozens of times since, and that is not an exaggeration.

The movie has an interesting history. It was made in the days when cinemas offered two features in a single sitting, the main dish and a minor starter. The Wicker Man was the minor starter. No matter: the studio executives in both Britain and the United States were so perplexed by the movie and its themes that they insisted on quite hefty cuts, which had the effect of completely distorting the time sequence as well as removing some superb scenes.

The movie was shown in a bowdlerised version and that was that; it was expected to die, the usual fate of the B feature. It did not; it grew and grew, catching the imagination of horror fans everywhere, until it acquired a huge cult following. Now fully restored in the director’s cut, it holds a 90% positive rating on Rotten Tomatoes, an aggregate of all reviews, not bad for a film made almost forty years ago.

As I said in a previous blog, so far as I am concerned The Wicker Man is the best pagan-themed movie ever made, full of drama, sexuality, ritual and song. The sacrifice at the end recalls the fate of the Roman captives after the Battle of Teutoburger Wald in 9AD, when many were allegedly burned to death inside huge wicker effigies.

For those who don’t know the movie, or who are confused by its themes, as I said on Blog Catalogue it’s essentiality about the cycles of life; about sex, death and reincarnation. The community of Summerisle, a remote Scottish island hidden away from the world, lives by its produce, apples principally. They also worship the old gods and are completely free of any form of inhibition or Christian concepts of morality. Sex is not just practiced, it’s celebrated as the generative force in nature, represented by the Maypole, the image of the penis.

A crisis comes when the crop fails. A sacrifice is needed and that sacrifice has to be a male virgin, Sergeant Howie, a policeman from the mainland, lured to the island on the pretext of a report about a missing girl. He arrives two days before the great festival of May Day and is steadily manipulated to the point where he takes on the guise of Punch, the great fool victim, in a procession. He is king for a day, and who but a fool would take on that roll? In the end the virgin, Christian policeman is led to his appointment with the Wicker Man. 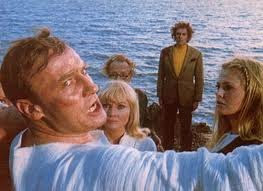 Everyone should be satisfied; firm in his Christian beliefs, Howie is accorded a martyr's death; he will sit in heaven among the elect. Firm in their pagan beliefs, the islanders look to a renewal of their fertility, though whether the gods are listening or not is never revealed.

Apart from the story I just love the mystery, the magic and the music. My favourite scene is that which features the singing of Gently Johnny, as another virgin is sacrificed, this time to Aphrodite in a living form. Lord Summerisle (Christopher Lee), the community leader, offers a boy, Ash Buchanan, to Willow Macgregor (Brit Ekland), the daughter of the pub landlord, the community’s sexual vamp. Willow and Ash fuck, the people in the bar sing, Lord Summerisle muses;

I think I could turn
and live with animals.

They are so placid
and self-contained.

They do not lie awake in the dark
and weep for their sins.

They do not make me sick
discussing their duty to God.

Not one of them kneels to another

or to his own kind that lived thousands of years ago.

Not one of them is... respectable
- or unhappy
all over the earth.

This is cut to a scene with Howie praying by his bedside, as the sounds of Willow’s sexual encounter come through the wall. These are scenes of innocence and guilt, I’ll leave you to decide which, but the pagans will know, yes, they will know. :-)

I put my hand all on her knee
She says to me do you want to see?

I put my hand all on her breast
She says do you want to be kissed?