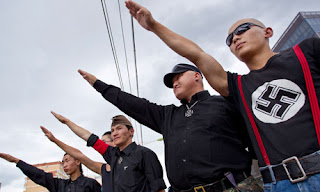 I originally wrote this for Retarius and Anastasia, a site which I share with an Australian friend of mine. My discussion with Yun Yi on my previous blog reminded me of some of the issues raised, so I’m publishing it here also.

There they are, all wearing black shirts, all raising their right arms in stiff salute, all shouting ‘Sieg Heil’, all praising Adolf Hitler and his commitment to ethnic purity. Where are we exactly – in the back streets of Munich or Berlin, or any other place in the west where unregenerate extremism continues to exercise its baleful fascination? No, as a matter of fact this is Ulan Bator, the capital of Mongolia.

Yes, indeed, there is a Nazi movement in Mongolia, including a group which goes by the name of Tsagaan Khass – White Swastika -, led by a man who calls himself, wait for it, Big Brother. Please stop laughing; it’s all true! Big Brother has a rather confused view when it comes to Hitler, which involves some bizarre cherry-picking;

We don’t agree with his extremism and starting the Second World War. We are against all those killings, but we support his ideology. We support nationalism rather than fascism.

What Big Brother fails to mention is that in Hitler’s racial pyramid the Mongolians came close to the bottom. It’s such a bizarre irony that Nazism is now embraced by at least some among the ‘degenerate horde’ as a positive ideology.

There is really no great surprise in this. Racist nationalism is often adopted by people with a deep sense of personal grievance or inferiority, people who excuse their own failings by scapegoating some minority or other. In Germany it was the Jews. I confess I don’t know an awful lot about Mongolia but I’m guessing that Jewish people are something of a rarity. No, it’s not the Jews that Big Brother and his kind are getting upset about – it’s the Chinese, or the Chinks, their term, not mine.

China is imperialistic and evil, the message goes out; the Chinese are a danger to the ‘pure blood’ of Mongolia. Just how is this danger manifested, you may wonder? Well, you see, the Chinese have a lot of money, allowing them to come and ‘take’ Mongolian women.

This fear of deracination is not simply the fantasy of a fringe; it feeds on wider prejudices among the nation. One of the most popular urban myths in Ulan Bator is that the Chinese government has a secret policy of encouraging its male citizens to come and have sex with Mongolian women. A popular hip-hop track regularly played the capital’s bars and clubs is called Don’t Go Too Far, You Chinks, with a chorus of “shoot, shoot them all.”

There have been attacks on some foreigners, something that the US State Department has warned potential visitors about, though those in most immediate risk from this xenophobia seem to be Mongolian women themselves, threatened with head shaving if they sleep with foreigners. Tsgaaan Khass takes an altogether moderate approach here, insisting that its role is simply one of “law enforcement.” Their policy is to carry out targeted checks, going to hotels and restaurants to make sure that Mongolian girls are not involved in prostitution and foreigners are not breaking the law.

We don’t go through and beat the shit out of everyone. We check our information and make sure its right.

Now that’s a reassurance, I feel sure you will agree.
Posted by Anastasia F-B at 17:00