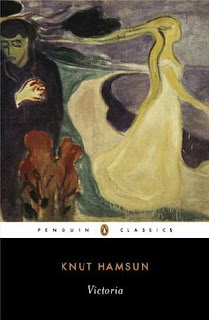 There are some books that have a lasting impact on one’s life, books that leave an indelible mark on one’s deepest emotions. For me there are a number, but Victoria by Knut Hamsun occupies a special place as the most captivating and heart-breaking love story ever written. I read it in my mid-teens, in the full flood of my most romantic period.

It’s a short novel; I finished it in less than two hours in a single sitting, overwhelmed by the poetic intensity of the prose, overwhelmed by the story of Victoria and Johannes, two people put on earth to love one another. They do, but there is no happy ending; events, social class, expectations, a sense of duty and circumstances all get in the way. It’s a story of love only fully declared in death, only fully revealed in an ending that absolutely numbed me, reduced me to uncontrollable tears.

I’ve now read it again, though I never thought I would; the first time was painful enough. But it came up in a discussion recently, so I decided to take the risk, if risk is the right word, with the aim of refreshing my memory and adding this appreciation.

I did not recapture the same raw emotions, knowing what was to happen, knowing the course plotted by fate and the writer. Besides, I’m older, a little more controlled, not quite so ready to give over to same teenage passions. Well…that’s not entirely true. There may not have been the same quantity of tears, but there were tears, terrible sadness over beautiful and frustrated love.

If you know Hamsun’s work you will know just how wonderfully he writes, how lyrical and poetic his prose. There are some passages that just leap out, memorable and brief. Here are a few of my favourites;

The days came and went: mild, lovely days filled with the bliss of solitude and with sweet memories of childhood – a renewed call to the earth and the sky, the air and the hills.

If she only knew that all his poems had been written to her and no one else, every single one, even the one to Night, even the one to the Spirit of the Swamp. But that was something she would never know.

What, then, is love? A wind whispering among the roses – no, a yellow phosphorescence in the blood. A danse macabre in which even the oldest and frailest hearts are obliged to join. It is like the marguerite which opens wide as night draws on, and like the anemone which closes at a breath and dies at a touch. Such is love.

…it is strange to think that all I’ve ever managed to do was to come in to the world and love you and now say goodbye to life.

Their days came and went; they came close, but they never managed to meld; there is too much misunderstanding, too many things left unsaid. So, yes, you’ve probably been here before, you will know the mood – it’s a story of unrequited love, Norwegian echoes of Romeo and Juliet, of Heathcliff and Cathy. In its directness and simplicity Victoria is a peerless story of an imperfectly perfect love, one that will remain with me forever.
Posted by Anastasia F-B at 15:51