Reflections on the Revolution in Egypt 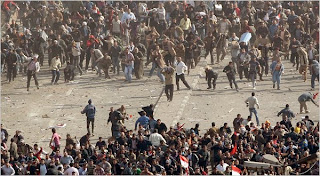 The Egyptians are living in interesting times in the fashion of the Chinese curse. I’ve offered no comment so far, waiting for the situation to become clearer, though watching the news broadcasts from Cairo and Alexandria last week some words of Edmund Burke’s came to mind. Appropriately enough they are from his Reflections on the Revolution in France, the seminal text of modern conservatism;

The effect of liberty to individuals is, that they may do what they please: we ought to see what it will please them to do, before we risk congratulations.

What is it, I wonder, that will please the mobs, beyond the departure of President Mubarak? What is to come after Ozymandius has left nothing but footsteps in sand and time? If one tried to find answers here, if one tried to penetrate beneath the surface of transient events, one is best to ignore the reports of the BBC, unbelievably banal in their shallowness and lack of understanding. Jeremy Bowen, their Middle East editor, was heard to say of the Muslim Brotherhood, the fundamental face of Egypt, that they are a “fairly moderate force here…they don’t want to rock the boat too much.” No, let the boat keep rocking; they will be there to steady it afterwards.

I cannot myself say what the outcome will be, though not a stable western-style democracy, that much I will hazard. The Islamists in the Brotherhood may not be as strong as they were in Iran, but they are still a potent and organised force, in much the same manner that the Bolsheviks were a potent and organised force in Russia before their putsch in November, 1917. As far as these people being a ‘fairly moderate force’ I would refer you to On Jihad, written by Hasan al-Banna, the movement’s founder, where he writes that the Koran and the Sunnah “summon people…to jihad, to warfare, to the armed forces and all forms of land and sea fighting.”

Please do not misunderstand me. Far from being an advocate of Mubarak it seems obvious that his dictatorship has been an unpleasant experience for a great many of the people of Egypt, though I feel sure not quite as unpleasant as the dictatorship of Saddam Hussein was for the people of Iraq. Just imagine what would have happened in his day if mobs had taken to the streets of Baghdad. Yes, I’m sure that Mubarak could be unpleasant, but at least he kept the country’s home grown fascist movement in check, the Brothers of the Brotherhood. More than that: in the wider politics of the region he has long been a force for moderation and stability.

Revolutions are all very well when they produce the results one approves of, but they don’t always do that, do they? If you are reading the book Egypt please don’t make the mistake of reading Eastern Europe 1989; read Iran 1979. Here I find myself in complete agreement with Andrew Roberts, the conservative British historian, who said with regard to the situation in Egypt that we should abhor policy created by mobs and assume that all revolutionary change will ultimately be for the worse.

What I find most astonishing is the attitude of Barack Obama, the weakest, most irresponsible President in American history. Here is a man who is calling for the departure of one of America’s closest allies; here is a man who appears to be urging on the Cairo mobs, though with no clear idea of what the outcome is likely to be for the people of Egypt as a whole. Yes, he speaks now just as he kept silent in 2009 when Iranian students took to the streets following the fraudulent presidential election in that country. It’s quite legitimate to wonder what exactly is going on here, just exactly how this wretchedly incapable man is advancing the cause of democracy and freedom, or even the interests of the United States. No matter who wins he loses, an opportunist ally, a false friend.

What do the Egyptians want themselves? For some time now polls have shown that they want democracy…but they also want sharia law, a glaring contradiction. The source of law can be God or it can be the people; it can’t be both. Will another Nasser emerge – could the country take more of the absolute misery that he inflicted on it? – or someone altogether more sinister, more brotherly?

Is there a ‘third way’ in a country that has never had a third way? I really don’t believe so, though there is the example of democracy Gaza-style, which gave us Hamas. I believe if things continue as they are, even if Mubarak goes, the chaos and anarchy will get ever worse, to the particular cost of the fragile Egyptian middle class.

And always keep ahold of nurse for fear of finding something worse. We may have cause to regret the passing of Hosni Mubarak, the Egyptians most of all.
Posted by Anastasia F-B at 15:52