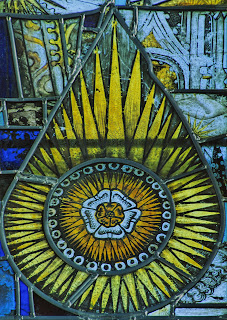 Shakespeare’s play Richard III opens with some particularly memorable lines. They are recited by Richard himself, then duke of Gloucester, the brother of Edward IV. The Wars of the Roses, the long dynastic struggle between the houses of Lancaster and York, are over; York is victorious, Lancaster broken and Edward sits securely on the throne. Richard muses;

Now is the winter of our discontent
Made glorious summer by this sun of York;
And all the clouds that lour’d upon our house
In the deep bosom of the ocean buried.

I have no idea if it was Shakespeare’s intention or not - though I have a hunch that it was - but there is a play on word and image here that brings to mind a number of associations. At its simplest the sun of York is also the son of York, in that the king is the son of Richard duke of York, killed at the battle of Wakefield in December 1460. But the sun also happened to be Edward’s personal badge, acquired under a very particular set of circumstances.

We have just past the six hundredth anniversary of the Battle of Mortimer’s Cross, fought on Candlemass, 2 February, 1461. In this Edward, then earl of March, defeated a Lancastrian force headed by the earls of Pembroke and Wiltshire. Just before the battle commenced a sun dog or parhelion appeared in the sky, an optical illusion caused by icy weather, making it look as if there were three suns. In Act Two Scene One of Henry VI, Part 3 Shakespeare describes it thus;

Three glorious suns, each one a perfect sun;
Not separated with the racking clouds,
But sever'd in a pale clear-shining sky.
See, see! they join, embrace, and seem to kiss,
As if they vow'd some league inviolable:
Now are they but one lamp, one light, one sun.
In this the heaven figures some event. 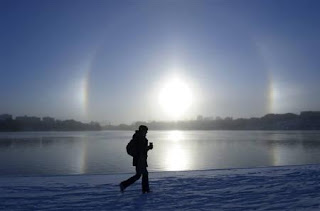 It was the eighteen-year-old Edward’s Constantine the Great moment. Recognising the symbolism, he is said to have persuaded his army that it was proof that the Holy Trinity supported their cause. Thereafter he adopted the rose-en-soleil – the sun in splendour – as his personal emblem. So, he truly was the son and the sun of York!
Posted by Anastasia F-B at 15:34