Return of the Voodoo Prince 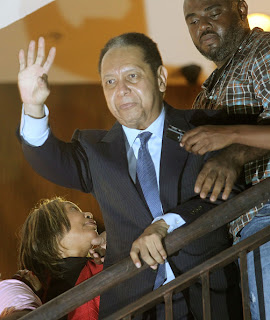 It was through Graham Greene that I alighted on the weird world of Haiti under Papa Doc Duvalier. Actually Greene’s novels took me to all sorts of strange places but the land explored in The Comedians is stranger than any other.

If you don’t know the story it tells of a country that flits between absurdity and nightmare, all presided over by a president who is perceived as an incarnation of Baron Samedi, a leading Voodoo deity, the spirit of the graveyards. This is a world where ‘naughty children’ are carried off in the night by Tonton Macote – Uncle Gunnysack - , a Creole bogyman who gave his name to Duvalier’s militia. It’s a world where nothing is quite as it seems, where nothing can be taken for granted. It’s a picture of a country descending into barbarism.

Papa Doc died in 1971 to be succeeded by his son John-Claude, generally known as Baby Doc. It’s difficult to describe the forms of ‘governance’ favoured by Papa and Baby; dictatorship, certainly, but one resting on a form of disorganised chaos. Medieval robber barons behaved with a greater sense of responsibility than the Duvaliers, who existed by extortion, the proceeds of the drug trade, the selling of body parts and the looting of foreign aid, all while the country descended ever deeper into the most abject poverty. The nightmare finally ended in 1986, when Baby was overthrown in a popular uprising.

The nightmare ended? Well, actually, no: Haiti is a place where all dreams turn to nightmares, though some nightmares are worse than others. It may be difficult to believe but the Voodoo age of the Duvaliers is now looked on with a certain degree of nostalgia by a people who have suffered disaster after disaster, natural and man made, earthquakes and socialism.

Now Baby has returned after years in exile. He is there, he said, to help rebuild his country. At Port-au-Prince airport he was greeted by cheering crowds. Haiti, I’m sure it will come as no surprise, is a country where one does not expect to die in ripe old age. I imagine there are few people now alive, few amongst that crowd, who actually remember Duvalier and the Tonton Macutes.

What he represents is an idea, an idea of stability and order, an idea of poverty not quite so dire. For people still living beneath scraps of corrugated iron in a capital still in ruins after last year’s earthquake, stability and order is the kind of nightmare they could live with. What they have now is the socialism of René Préval, one dark dream too many. When one understands that a faded corrupt former playboy represents hope one begins to disentangle the tragedy of Haiti.
Posted by Anastasia F-B at 15:23