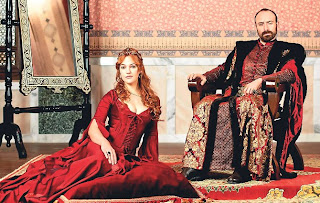 I read – though I can’t swear to the truth of it – that when people in Hungary encounter some extraordinary mishap they are consoled with the words “Never mind; more was lost at Mohács field” (Több is veszett Mohácsnál). The reference here is to the Battle of Mohács, fought in August 1526 between Hungarian forces led by King Louis II and those of the Ottoman Empire, commanded by Suleiman the Magnificent, the greatest of all the sultans. It was a disaster for Hungary, so much so that it occupies a place in the national consciousness similar to that of the Battle of Kosovo for the Serbs.

Given his prestige, given this victory, given the way that Turkish forces advanced so far as the walls of Vienna under his leadership, given that his death was followed by a long drawn-out decline, Suleiman continues to occupy a central place in the consciousness of Turks.

Now this iconic figure is the centre of a new battle, one that ranges the country’s Muslim conservatives against the secularists who take their stand behind the memory of Kemal Atatürk, the founder of modern, post-Ottoman Turkey. It’s the great fault line, becoming ever wider because of; because of what, exactly? Well, it’s because of a television drama series!

The series penetrates right into some of the places that conservative Turks would much rather not go: namely, into the harem. Suleiman is not just shown as the great soldier and leader; he is also shown as a man, a man with ordinary passions, a man lusting after Roxelana, the love of his life. Just as bad, he is shown drinking goblets of wine, particularly unpalatable for the conservatives.

It does not really matter if it’s true or not, it does not really matter that his son and successor was such a notorious drunkard that he has gone down in history as Selim the Sot, to see a national hero, caliph as well as sultan, breaking a fundamental Muslim commandment against the consumption of alcohol is another step too far.

Things are so bad that Halit Ergenc, the actor playing the sultan, has received death threats. Even the government has been moved to intervene. Bulent Arnic, deputy prime minister, has called for the series to be scrapped. “It shows him”, he said, “in his harem, fond of drinking and in certain scenes that I cannot find words to express.” Well, let me express it then: it shows that Suleiman was a man.

RTUK, the state media watchdog, has warned the broadcasters, Show TV, that they are clashing with the “national and moral values of our society.” Meanwhile protesters have gathered outside the studios, ushered there by the Islamist Saadet party. In spite of this the producers are fighting back, saying that “the children of the Sultan were not conceived by pollination…he did have a sex life and a family.” As is the way with these things the controversy has boosted the ratings tremendously.

It all seems so minor, I know, such a silly fuss over what are, I imagine, not having seen the show, some very chaste sex scenes. Still, its significance should not be minimised: its part of a bigger struggle over Turkey’s identity as a nation. Is it to remain a secular and modern republic in the fashion of Atatürk or is it to retreat into more fundamental courses, a place where sultans and caliphs may have all the sex and alcohol they like, just so long as the population remains in a state of benighted ignorance?
Posted by Anastasia F-B at 15:12