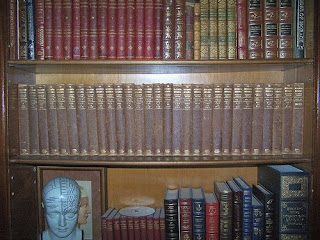 I mentioned yesterday that we have the eleventh edition of the Encyclopaedia Britannica, published in 1911, with three supplementary volumes appearing in the early 1920s. It’s been in our family now for close on a hundred years, bought by my great-great-grandfather just before the First World War.

It’s so intriguing, not at all like the modern day Britannica, which consists mostly of dictionary-length entries, hors d'oeuvres that never satisfy the appetite. The eleventh in contrast has lengthy articles, often by the leading experts of the day. Where else, I wonder, could one find a collection that contains submissions by people as diverse as Leon Trotsky and Harry Houdini?

I spent hours dipping into it in the past, following trails, dreaming in the company of serendipity. Clearly a lot of the information is obsolete, superseded by later scholarship, but its real value is that it has, in itself, become a fascinating historical document, reflecting many of the preoccupations and concerns of the day. Things that occupied a significant place in Edwardian consciousness have now diminished to mere footnotes in history. I’m thinking specifically here of the 1897 war between Greece and Turkey, to which several pages are devoted.

It’s the old pull-out maps that I love most, maps that reflect the political geography of the day. There is a wonderful one of Europe before the Balkan Wars, with the Ottoman Empire still stretching from the Black Sea to the Adriatic. The Germany Empire stands proud in the centre of the Continent, France seemingly deprived of the provinces of Alsace and Lorraine forever. To the south is the land of the Habsburgs. Look to the east: there is the Empire of the Tsars; there is no Poland, no Finland and no Baltic States. It truly is like coming across the outlines of a vanished civilization, the highways where people went and can never come again. 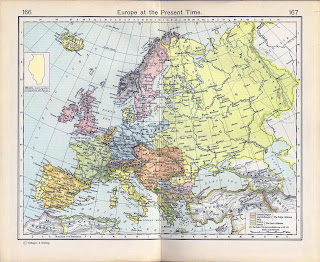