The days of Herod the King 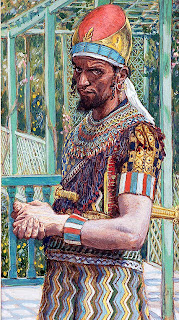 I visited the Western Wall, the holiest site in Judaism, on the first full day I spent in Jerusalem. It’s all that is left of the Second Temple built by Herod the Great, destroyed when Titus, son of the Roman emperor Vespasian, sacked the city in 70AD during the Jewish Revolt. Standing there looking rather lost, we were approached by a local guide, Hasidic, judging by his dress and appearance, who proceeded to tell the story. “It was built by Herod”, he said, “who of course was not a Jew.”

Though surprised I did not pursue the point; not here, not in this place, not with this man. I have to stress this was not for any fear of his reaction but simply because I did not want to cause any offence, or to raise issues which I may not have fully understood or appreciated. Still, I thought to myself, what was Herod if not a Jew? Why would a man who was not a Jew dedicate himself to re-founding the Temple of Solomon?

That was a few years ago. I think I understand a little better now. By the lights of my Orthodox guide Herod was not a Jew; he was far too unorthodox for that, a man who had a foot in the Greek and Roman as well as the Jewish world. But there is something else: he was not a Jew simply because he was not a Judean – he was an Edomite, the son of Antipater the Idumaean, Semitic, yes, but not quite ‘one of us.’

Despite his achievements, including the Temple, Herod has a poor reputation in both Jewish and Christian tradition. A poor reputation? No, that’s far too mild: he came to me, as he came to all those raised in the New Testament, as a monster, as a killer of babies, the man who ordered the Massacre of the Innocents in an attempt to destroy a new-born rival, Jesus, king of the Jews.

I don’t want to dwell on this. All I will say is that it is certainly something the historic Herod was capable of, something any ruler of the day was capable of when told they were faced with a rival, from within their own families let alone without. Herod was ruthless but no more ruthless than any other, no more ruthless than, say, Cleopatra, his contemporary, who freely murdered some of her nearest kinfolk. Herod may have been mad, bad and dangerous to know, but he was so much more than the monster depicted in Mathew’s Gospel.

I’ve been reading about Herod in Simon Seabag Montefiore’s recently published Jerusalem: the Biography, and in an article by Geza Varmes, Professor Emeritus in Jewish Studies at Oxford, in the latest issue of Standpoint (Herod the Terrible or Herod the Great?)

Setting aside a particularly grim family history, there is so much to admire in the man as a soldier, as a ruler, as a builder and as a politician. His gamesmanship was astonishing. One slip, one false move, could have meant disaster. His genius, it seems to me, lay in recognising the limits of his power and the challenges he faced, in exploiting those challenges to maximum advantage.

The world was changing: the Romans were the dominant force, though the transition from Republic to Empire was not fully complete. Herod had to negotiate his way around powerful rivals including Cleopatra, more venomous in every way than the asp that eventually killed her. She, in her ambition to take over Herod’s kingdom, had the potential to call on the support of Mark Anthony, her lover and master of the east.

Despite this Herod always managed to stay high in Anthony’s favour, something else that may very well have brought his destruction. In the final civil war of the Republic he was obliged to take the side of his powerful mentor, though fortunately for him he took no part in the Battle of Actium, which saw the victory of Octavian, the future Emperor Augustus. Still, it was a tricky moment. Herod came to see Octavian at Rhodes and skilfully won him over. He was confirmed as king of Judea and adjacent provinces.

I was about to write that the old survivor descended by stages into murderous paranoia, less the Massacre of the Innocents, more the Massacre of the Relatives. Paranoia, however, is the wrong word, suggesting imaginary fears; Herod’s fears were anything but imaginary. The scheming and treachery within his family, which saw the execution of Mariamme, his much beloved wife, the victim of a Desdemona-style whispering campaign, and Alexandra, his much hated mother-in-law, was real enough. The family tragedy grew ever more intense as Herod approached the end, embracing the destruction of his sons Alexander and Aristobulus, accused of plotting parricide by Antipater, their half-brother. If he was mad he had reason to be.

Herod was a complex man, a mixture of good and evil, light and dark. The Massacre of the Innocents, whether it happened or not, stands as a kind of metaphor for his brutality, not just the family brutality but the ruthless way he could on occasions behave towards his subjects. A brute for Saint Matthew he was also a brute for Josephus, the Jewish chronicler who provides the most complete record of his acts, which explains why he has so few friends today, either among Christians or Jews.

It’s rather a pity in so many ways for the simple reason that there was also brilliance. A political realist, Rome, he recognised, was an unshakable part of the new world order. For the Jewish people it was a pity that the Machiavellian example he set was not followed. Judea had to find a place in that order and not be seduced by religious and messianic zealotry. If it had the destruction of the Temple, the Diaspora and all that followed may have been avoided.

Herod may not have been a good man, but he was a great one and the great are seldom good. He deserves to be better remembered, to be better understood.
Posted by Anastasia F-B at 15:40