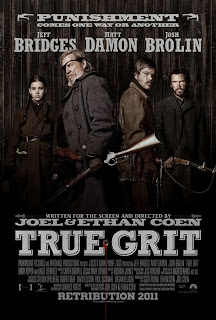 The western is not the kind of movie genre that I normally find appealing. Two things took me to see True Grit: the persuasiveness of my boyfriend and the fact that it was written and directed by the Coen brothers. I’ve been a huge admirer of their work ever since I saw No Country for Old Men. Still, I wasn’t sure what to expect, especially as it looked to be no more than a rerun of the 1969 movie of the same name, starring John Wayne. Second bites, in my experience, are generally disappointing if not disastrous.

This was no second bite: this was a tour de force, a brilliant movie filled with grit. Based like its predecessor on the novel by Charles Portis, True Grit is a story with strong mythological overtones, a fable where a murder invokes the pursuit of the Furies. In this case, though, there is only one Fury – fourteen year old Mattie Ross, brilliantly played by fourteen year old Hailee Steinfeld, for me the highlight of the whole film. Controlled, full of Presbyterian self-righteousness and Biblical notions of right and wrong, her Mattie is as electric as Electra.

Mattie’s father has been killed far from home by Tom Chaney, a hired hand played by Josh Brolin, who promptly flees into the dangerous Indian territories of Oklahoma, a place where nobody cares enough about the dead man to pursue him, not even the law. Mattie arrives to collect her father’s body, while her less capable mother cares at home for her younger siblings; but she comes with a supplementary motive: she wants to see his killer pursued and hanged.

There was something about Mattie, something about Steinfeld, which reminded me of Jennifer Lawrence as Ree Dolly in Winter’s Bone. Different in so many ways, they both possess the same qualities of determination and self-reliance well beyond their years, a desire above all to do what is right and necessary, no matter the adverse odds. Both are tough in their own ways, though not so tough that a child-like vulnerability occasionally comes to the surface.

My, what self-possession Mattie has, what incredible single-mindedness. The movie has some wonderfully comic moments, none more so than her horse trading with Colonel Stonehill (Dakin Matthews) the horse trader. One almost begins to feel sorry for the poor man, crumbling under the girl’s onslaught!

To track down Chaney Mattie finally hires a US Marshal by the name or Rueben ‘Rooster’ Cogburn, a disreputable, dishevelled and hard-drinking, one-eyed lawman played by Jeff Bridges, who mumbles and grizzles his way through the movie. Don’t misunderstand: he does the part well, though I found his dialogue a little difficult to follow at points. Rooster, despite his faults, has exactly what Mattie wants – he is a man not readily daunted; he is a man with true grit…almost enough to match her own.

In the eventual pursuit (Rooster makes the mistake of trying to give Mattie the slip), they are joined by a Texas Ranger named La Boeuf – invariably pronounced as La Beef - , played by Matt Damon, a pompous and slightly dandyish character who is after Chaney for a separate crime. As they journey together into the territory of the Indian Nations, where Chaney is believed to have joined with the gang of one ‘Lucky’ Ned Pepper (Barry Pepper), a highly effective tension builds between them, conflicts of character and conflicts of motive.

There is so much to enjoy in this movie; the script, the acting, the score, the characterisation, the scenery and the slightly-archaic dialogue (At one point La Boeuf says to the straight-talking Mattie “You give very little sugar with your pronouncements.”) The cinematography is truly excellent, with little of the summer-time ‘prettiness’ of more traditional westerns. A winter’s journey, the palette is one of muted tones, of greys, of creams and of browns; muted, yes, but with a simple, stark beauty.

As I have already said, there are some superb comic scenes, including a perfectly surreal moment when what appears to be a bear enters stage right riding a horse. This isn’t Davy Crocket wearing a coon-skin cap, this is a dubious travelling dentist and all round medicine show, who just happens to be wearing the whole hide of his particular animal, the head on top of his head!

In the end Mattie gets her man. In the end Rooster, who has little in the way of finer feeling, develops a father-like solicitude towards his young employer, riding hard with her to a get a doctor after she has been bitten by a rattlesnake. In the end there is a coda with Mattie, now twenty-five years older, missing part of her arm from the snake bite, having taken another body, that of Rooster himself, back for burial in her family plot, there musing how time finally catches up with us all.