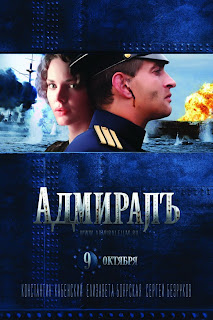 I’m such an enthusiast for lost causes, movements which I imbue with my own romantic vision: the Cavaliers of the English Civil War, the Confederates of the American Civil War and the White Guard of the Russian Civil War.

I have a particular enthusiasm for the latter, for the men and women who tried to save Russia from Lenin and his criminal band. I have a particular enthusiasm for the leaders of the White Army; men like Anton Denikin, Pytor Wrangel and Aleksandr Kolchak. Ever since the fall of communism there has been a new appreciation of these people, once defiled. When I was in Moscow I was able to lay some flowers on the grave of Denikin, reinterred with honours in Donskoy Monastery in October, 2005.

It was therefore with considerable anticipation that I recently approached The Admiral, a 2008 Russian-language movie about Aleksandr Kolchak, once an Arctic explorer, an admiral in the Imperial Russian Navy and finally head of the anti-Communist forces in Siberia as Supreme Ruler of Russia, captured and executed in February, 1920. Vilified by the Soviets, there are now monuments to his memory in both Saint Petersburg and Irkutsk.

The Admiral, unfortunately, is a plodding disappointment, a movie constructed in such a way that it inevitably invites comparison with David Lean’s Doctor Zhivago, far superior in every sense. Doctor Zhivago is a love story set against the grand sweep of Russian history, a tale of ordinary lives being submerged by history.

The Admiral is also a love story, that between Kolchak (Konstantin Khabensky) and Anna Timiryova (Elizaveta Boyarskaya), a poet and his long-standing mistress. The couple are handsome, just as handsome as Omar Sharif as Zhivago and Julie Christie as Lara, but sadly there is no chemistry at all, no spark of life in their tepid romance. Their exchanges are wooden, their encounters barren.

The other point of contrast is the handling of the wider themes, the handling of events. In Zhivago the scenes of war, of revolution and of civil war were woven effortlessly into the lives of the principle characters. But with The Admiral, despite some impressive moments, including the early footage of naval combat during the First World War, history seems to hang around, waiting to be introduced at periodic interludes.

I was so looking forward to seeing this movie. A reassessment of the career of Kolchak and the struggle of the anti-communist resistance was long overdue. My disappointment at this uninspiring and plodding effort was therefore so much the greater.