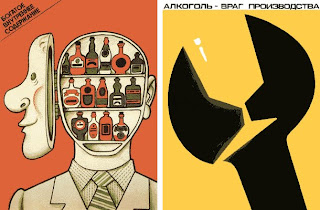 This comes as part of the Kremlin’s latest anti-alcohol campaign, the toughest since the collapse of the Soviet Union. The Russians have long had a serious problem here. In communist days a combination of cheap vodka and personal despair over the frustrations of life in the Soviet paradise led to a huge upsurge in alcoholism. The last serious attempt to tackle the issue was in the time of Gorbachev, an anti-alcohol drive that caused the last of the communist puritans to be nicknamed Lemonade Joe.

Now the special status of beer is to be ended, a special status that has given many Russians the impression that it’s actually a soft drink - apple juice with attitude! Actually, they may not be quite alone here. I remember reading that F. Scott Fitzgerald, the American writer, in battling with his own alcoholism gave up spirits in favour of beer, consuming the latter by the crate load! But when Russian teenagers can be seen during school intervals downing a can or two in the local park something really has to be done.

President Dmitry Medvedev recently declared that Russia’s drinking problem was a “national disaster.” There is really nothing new here; it always was a national disaster in a country where people are estimated to consume thirty-two pints of pure alcohol per capita per year, more than double the World Health Organisation’s recommended limit, and where some 500,000 die annually form alcohol-related diseases.

But there is an added dimension, an added worry; for Russia is dying, the Russian people are dying. Between 1991 and 2009 the population of ethnic Slavs fell by over six million. Federal estimates suggest that it could fall by a further fifteen million between now and 2031.

So something has to be done, but what? The reclassification of beer is one solution; the other is to warn Russians of the adverse effects of overconsumption, no matter that they have resisted the message in the past. They didn’t respond to the lectures of Lemonade Joe. Perhaps a squirrel might serve better. A squirrel?! Yes, that’s right, a drunken squirrel, which made its way into the television screens last December.

I’m not quite sure if it’s managing to achieve the ends the Kremlin intends, but the said squirrel has acquired a huge cult following across the world, now with well over three million hits on YouTube, my own included! I don’t speak Russian but I’ve been told that he’s ranting on about chasing spiders up the wall and offering to kill his neighbour’s wife because she is the devil.

The mad squirrel was not chosen by chance. The Russian slang word for delirium tremens, that condition of deep alcoholism where people start to hallucinate, is belochka, meaning little squirrel. It’s now to be seen if Little Squirrel is any more effective than Lemonade Joe, who was mad for other reasons altogether. God save Russia, because Russia may not be capable of saving itself.