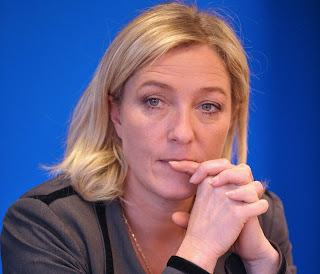 The French political right is possibly the most fractured in Europe, a condition of its history. To the right of the Gaullists, to the right of the right, are those who stand against the tradition of 1789. They are the people, if you like, of the Vichy tradition, those who were never fully reconciled to the loss of Algeria. It’s a tradition represented by the National Front, headed until recently by Jean-Marie Le Pen.

Like him or not, Le Pen is one of the giants of post-war French politics, occasionally spoiling the feast of the more traditional parties, a little like the ghost of Banquo. In the presidential election of 2002 he beat the Socialist candidate, Lionel Jospin, into second place, forcing the left and centre-right into an unholy alliance behind Jacques Chirac in the second round to ward off the monster. His catchphrase “If anybody doesn’t like France, they should leave” was even echoed by Nicolas Sarkozy ahead of the 2007 election, a sign of how far the Front’s message has percolated into the mainstream.

I’m not keen on Le Pen, I must say; he’s too much of a bruiser, too lacking in subtlety, not quite the gentleman. Still, I agree with those sentiments; I would like to see them applied to my own country, I would like to hear leading politicians say that if you do not like Britain then leave, go, go in peace, but go. People who talk down this country, people who do not value its traditions of tolerance and freedom can get lost, the quicker the better. Please do not misunderstand me: so far as I am concerned this has nothing to do with race, or colour, or ethnicity, or religion. It has, rather, everything to do with attitude.

I’m digressing. Let’s get back to Le Pen and the French far right. Le Pen is dead; long live Le Pen. No, the old chap is not really dead; he’s just taken a back seat, giving way to Marine Le Pen, his daughter, who came top of a leadership poll last month. A lawyer by profession and a mother of three, she is far more personable, far more chic, as the French would say, in every way, carrying little of her father’s ideological baggage. She’s got class, unlike Nick Griffin, the glass-eyed fright who heads the British National Party. She appears on television without looking shifty and evasive, in the way that Griffin looks shifty and evasive.

Her biggest asset is that she carries nothing of the Vichy-Algiers tradition, looking to give the right a new direction, away from past neo-Nazi fixations which kept it penned (Le Pened?) in an electoral ghetto, going so far but no further. She has taken a stand on the tradition of French secularism, making it harder for more established politicians to attack her ‘extremism.’ Her main advantage, besides being the new attractive face of the right, is that people are fed-up with the political mainstream, fed up with both Gaullism in the Sarkozy form, and fed up with the Socialist alternative. Marine’s approval ratings have now reached an impressive 33%, higher than her father every achieved in his heyday.

The ruling UMP party is worried. The fear is that the 2012 presidential election could turn into 2002 in reverse, with Le Pen beating Sarkozy into a second round contest. It does not seem likely, but with Little Nic reshapping the debate on the future of France in terms defined by Marine she has already scored a kind of victory for the new respectable front.
Posted by Anastasia F-B at 15:25