Breaching the wall of silence 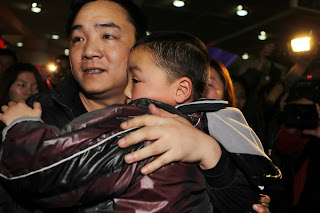 There was a story on the main evening news broadcast here last week abut Lele, a six-year old Chinese boy kidnapped three years ago and now reunited with his family. I was moved to tears by the warmth of the reunion of the little boy with his parents and community, and by the sad tragedy that for every child found hundreds are still missing, many never to be recovered.

There is a combination of things at work here, things that have turned child kidnapping into an epidemic in China. As part of a scheme aimed at controlling a booming population the Chinese Communist government introduced a one child policy a number of years ago. This is all very well if the child is a boy; for by long-standing Confucian tradition there is a preference for male children, to carry on the family name, amongst other things.

So, in a country where children are at a premium, especially boys, a vicious black market has grown up, specialising in kidnapping. I read in the Sunday press that an estimated 70,000 children are sold by gangs every year, some fetching as much as £10,000.

It’s a terrible scandal; it would be a terrible scandal in any country but China. Why? Because it embarrasses the communist authorities, unwilling to lose face, unwilling to admit the scale of the problem. Parents of missing children often get only the most perfunctory assistance from the police. Worse than that: if they become too persistent in their quest they start to face official harassment. Peng Gaofeng, the father of Lele, was told to give up his campaign because it was disrupting ‘social harmony.’

In the end it wasn’t the police, the government or the party that found Lele; it was the ordinary people in a marvellous display of simple human solidarity. Twitter is banned in China but there are other microblogging sites, places that give the people a voice, empowering them in the way that they were never empowered before. With the help of Deng Fei, a journalist, Lele’s picture was tweeted to people all over the country. He was eventually spotted in Jiangsu province, some 2000 kilometres from his home.

Commenting on the power of the microblog (they are used by an estimated 100million people in the country) Deng said;

With this tool, everyone can express themselves immediately. Things can no longer be kept secret. Microblogs break the monopoly on information. They mean it can flow freely. A lot of things in China are caused by the lack of transparency here. So a lot of things will change now.

It truly is the breach of the Great Wall of Silence, a way around official complacency and unofficial corruption. Unfortunately this true voice of the people, so long gagged, exists only by the indulgence of the state. Like Twitter the microblogs could be closed at any time if they are perceived to threaten the monopoly of the party, or if they are found to disrupt a fictitious ‘social harmony’. I wish I could share Deng Fei’s optimism but the sound of silence is always to be feared.
Posted by Anastasia F-B at 15:06