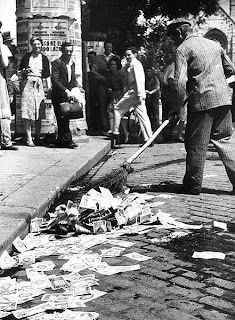 Blog Catalogue is one of the forums I belong to, a sort of encounter group for compulsive writers, chatterers of all sorts. Given the nature of the medium, and given the different levels of interest and experience, there is a lot of inconsequential ephemera, all sorts of trivia. Occasionaly, though, something comes up which stimulates my imagination, sets me off on yet another path. One such was a recent discussion on the nature of money.

It’s interesting to think about money, coins or paper, or debit cards backed up by nominal deposits of coins and paper. In itself it is nothing; it has no value and it has no use. When it comes to it money is little more than a kind of collective illusion, a shared belief in a form of magic, magic that persuades one to surrender real time and wealth into liquidity. But the magic can disappear; the confidence can disappear, corroded away by a form of fiscal disease, a disease that goes by the name of inflation.

In most normal circumstances inflation has a tendency to creep rather than run. But there are times when the disease acquires a frighteningly rapid character, undermining not just the economy but society itself. There are lots of examples here but the one I have in mind is the German inflation of the early 1920s, a time when money could not be printed fast enough to keep up with the rise in prices. The effects were devastating.

Consider the following example, a true one, I assure you. It concerns an individual who got a letter from his bank, saying that they were closing his account because it was simply no longer economic to manage. The deposit in question was the individual’s life savings, accumulated over thirty years of employment, some 30,000 marks, a reasonable nest-egg at pre-war values. Now the value and the time invested counted for less than nothing. The letter came enclosed with a note to the value of 10,000,000 marks, the lowest the bank had. If that was not bad enough the envelope was franked with a 50,000,000 mark postage stamp.

I have no doubt that inflation is an evil, not just a financial evil but a moral one also, destroying savings, destroying lives, attacking those on fixed incomes, the most vulnerable of all. Inflation eats away at society itself, eats away at the basis of social cohesion and civilization. To that extent it is a far greater evil than unemployment. Yes, I’m sure to be out of work is a traumatic experience but it’s most often a temporary set of affairs. Even when it’s prolonged it does not tend to tear the social fabric. It is possible to live with high unemployment just as it is impossible to live with consistently high inflation.

In the end inflation, if not checked, can at its most extreme turn history into reverse. It’s at the point where money is worthless that the most primitive forms of barter arise, where goods are exchanged directly for other goods, assuming one has goods to exchange. Here I have the example of Russia in mind, Russia in the years immediately following the Revolution of 1917, the world of the bagman, the cigarette-lighter economy, which made a partial reappearance in the economic crisis of the 1990s.

So, inflation is the great monster, one that robs money of its magic, one that would, if unchecked, reduce life to the most primitive state of being, a state of economic Darwinism. It’s the fifth horseman of the apocalypse.
Posted by Anastasia F-B at 15:30