Thoughts of a thoroughly modern miss 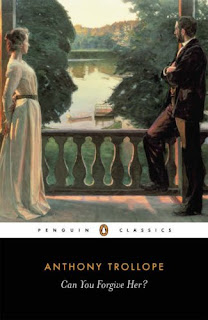 I mentioned previously that I decided that this year was to be my Trollope period; that I was determined to chase this eminent Victorian down the highways of his fictions. Church or politics was to be the point of departure; the Chronicles of Barsetshire or the Palliser series. In the end politics and Palliser won out!

I’ve now vaulted my first fence, just having finished – literally some twenty minutes ago – Can You Forgive Her?, the first of the six Palliser tomes. That word, the word ‘tome’, carries such negative overtones - at least I feel it does - , suggesting something weighty and just a tad tedious. Can You Forgive Her? is certainly weighty, weighing in at over eight hundred pages, though I did not find it in the least tiresome.

The person one is supposed to forgive, the focus of the book, is Alice Vavasor, who finds it difficult to decide exactly whom she will marry: the worthy but dull John Grey (Trollope’s intention here is given away in his choice of name) or her cousin George, colourful and ambitious but ever so slightly disreputable.

There is actually a supplementary question, closely related to the main one: namely what is a woman to do with her life? Remember this is mid-Victorian England; there are few opportunities for people like Alice, who is far too well-connected to consider any ordinary occupation, while having the main routes for ambition closed to her by her sex.

She is expected to marry well; her relatives (some of them have the most absurdly comic aristocratic titles I have ever come across!) expect her to marry well, which is to marry Grey, but for Alice love and duty are not enough; she needs a positive outlet; she needs to live vicariously through the success of her partner. In other words, she wants to be a politician’s wife!

The whole novel is structured around choices and the implication that these choices carry. It’s also one of relationship triangles; the central one between Alice, John Grey and George Vavasor; the comic relief brought by Alice’s coquettish Aunt Greenow, a merry widow and her two suitors, Captain Bellfield and Mister Cheeseacre; and that between Plantagenet Palliser, a rising politician, his young wife, Lady Glencora, and her erstwhile suitor, Burgo Fitzgerald.

Glencora, what can I say about Glencora? Devilish, impish, effervescent and vivacious, she was my favourite character by far. I never really warmed that much to Alice, who seems to be perversely committed to the wrong course. Oh, not just because she jilts the wholesome John Grey in favour, as it turns out, of the completely unwholesome George Vavasor, but because I found it difficult to determine exactly what her motives were. There is also something stiff about her character, something rather humourless.

Glencora eclipses her completely. She has been presented with choices also; or rather she has had choices made for her, a rich heiress married for duty rather than love. One feels that Plantagenet and Alice would have been far better suited (Glencora’s humorous remarks and the statistical-mindedness of the pair are priceless), allowing Glencora to be swept away by the beautiful but feckless Burgo.

But this is a morality tale, one of high Victorian morals, which the author clearly intends to promote, where money, property and a proper sense of place should never be allowed to drift too far apart. The likeable rakes and the despicable cads, the Burgos and the Georges, lose the game or disappear from it altogether. Well, there is the single exception of Captain Bellfield, rake rather than cad, who wins out over the worthy Cheeseacre, but one simply knows that the Widow Greenow is going to keep him reined well in!

In the end, like all good morality tales, everything falls into place. Plantagenet decides that for a time his political ambitions must take second place to cultivating and nurturing his wife, with the result hoped for by all concerned. Alice realises that her decision to reject Grey in favour of George was so ill-judged that she finds it most difficult to forgive herself. Yes, she accepts Grey and they marry - though it seems in the end to be as a kind of penance – but only after she is most horribly patronised by him and by members of her extended family!

At least she has one small success: Grey, with the help of Palliser, decides to enter Parliament, so Alice may have a political salon after all, rather than sink into a tedious routine of more mundane wifely duties. In the end I found myself sidestepping Trollope’s central question. Although I might have come closer to understanding her, I had absolutely no interest in forgiving her, or in condemning her, for that matter. All I will say in way of reproach is that she should have known her mind and her men better. I would.

Trollope has a crisp and engaging style, much more disciplined than Dickens, his contemporary, must less panoramic and comically exuberant, better, in many ways, in creating more humanly rounded characters. He combines this with a tendency to intrude overmuch as the moralising narrator for my taste, with little homilies to the reader. That’s a small quibble because I found Can You Forgive Her? an immensely enjoyable novel of Victorian people and attitudes, though my reading is not necessarily the one the author would have wished. I’m a modern miss, you see, with few preconceived moral expectations, expectations about the proper place of women in the world. :-)